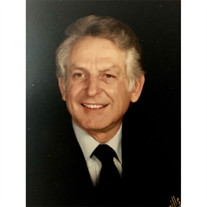 On Thursday, August 29, 2019, Richard James Rountree, passed away at age 87. Richard was born on April 19, 1932 in Skiatook, Oklahoma.  He graduated from Wild Horse High School in 1950. He left the family farm to honorably serve in the Army during the Korean Conflict in 1955 and '56. He was ordained into the ministry on December 28, 1958, at Immanuel Baptist Church, Skiatook, Oklahoma. He received his Bachelor's of Arts Degree from Oklahoma Baptist University in May of 1961 and his Master's Degree of Divinity from Southwestern Theological Seminary in January of 1964. He pastored churches throughout Texas and Oklahoma until purchasing the Reed-Culver Funeral Home in Tahlequah in 1975. He retired from that business ten years later to build his dream home on Skiatook Lake. He continued to preach and pastor in and around the Skiatook area. Richard, (Dick to family and friends) had three passions in life - his Faith, Family and Football. He would daily get up early to read his Bible and study the word of God. He loved his family, his favorite times were having them near him. And he was very passionate about his Oklahoma Sooners football team. He had a wonderful laugh, kind smile, and a compassionate spirit. Richard was preceded in death by his father, Fred and his mother, Irene; as well as his first wife, Wilma; his brother,Howard and his sisters, Genevieve McCulloh and Francis Bolin. He is survived by his son, James Rountree, wife, Betsy and their children, Elizabeth and Noah and his daughter, Alicia Kinney, and her children, Corbin and Joel; Richard's wife, Johnette Rountree and her children, Jeff Jones, Jay Jones and Jill Jones.

On Thursday, August 29, 2019, Richard James Rountree, passed away at age 87. Richard was born on April 19, 1932 in Skiatook, Oklahoma.  He graduated from Wild Horse High School in 1950. He left the family farm to honorably serve in the Army... View Obituary & Service Information

The family of Richard James Rountree created this Life Tributes page to make it easy to share your memories.

Send flowers to the Rountree family.