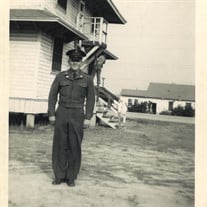 Richard Lee Riley SR. went to be with our Lord and Savior on April 20, 2021 at his home in Delaware, OK, he was 90. Richard was born January 21st, 1931, the second of 16 children to Thomas Marion and Lettie Mae (Woods) Riley in Nowata, OK. Richard attended Nowata schools until it became necessary he find employment to help the family. He worked at SD Harrison as a Sawmill Operator, in Vinita, OK. Richard enlisted in the Army National Guard, 45th Infantry Division on August 31, 1950. He was deployed to Korea on September 1, 1950 where he earned the Army Occupation Medal, Korean Service Medal with one (1) Bronze Service Star, and the United Nations Service Medal. He was honorably discharged on August 30, 1953 after proudly serving his country in the Korean War. After the war he worked in the oilfield as a Tool Dresser, as well as a Ranch Hand on the Lowry Ranch in Lenapah, OK, until as he told it to a granddaughter, “I fell in love and had to get on back to town”. Richard married the love of his life, Dale (Earlene) Ridenhour on January 24, 1954 at the Twin Bridges Community Building east of Childers, OK. From this union two sons were born, Richard Lee Riley JR., and Randall Dale Riley SR. Richard worked hard and provided for his family as an Assembler at Funk Manufacturing/Cooper Industries, which is now known as John Deere in Coffeyville, KS. He retired after 30 years of being a loyal and dedicated employee. Richard loved to hunt in his younger years, so much so he would save up his vacation time and would take a month off and hunt daily during quail season with his award-winning pointer bird dog. Richard also enjoyed fishing and was very fond of Lake Fork Texas. He and Earlene spent twelve years at Lake Fork where they caught countless fish, and better yet made many close friends and precious memories. Richard was a longtime member of the Masonic Lodge # 477 in Delaware, OK, as well as a proud member of the Cherokee Nation. Richard enjoyed talking on his CB radio, listening to his records, riding his horse, and tinkering around the yard. What brought him most joy, however, was his family. Whether it be traveling with Earlene, loafin’ with his boys, visiting with his siblings, watching the grandkids sports events, or spoiling his great grand kids. He no doubt enjoyed and loved time with his family. Richard was preceded in death by his parents, wife Earlene of 66 years, Sisters Janie Riley and Catherine Enloe; Brother Thomas Riley JR, two sets of twin brothers who passed in infancy, and Grandson Shane Riley. He will be missed by son Rick (Debbie)Riley, son Randy (Judy)Riley, Grandchildren Heather Dawson, Billy Dale Riley, Ashly (Billy)Guthrie, Jeremiah (Lesley)Riley, Brandi (Clint)McGee, Randall Riley, Hayly Riley, and 14 Great Grandchildren. Sisters Juanita Moody, Mary Smith, Georgia Creason, Jessie Ellis, and Deloris Cain. Brothers George Riley, Bill Riley, and Charles Enloe. Life-long friend who was like a brother, John Shipley. As well as a host of nieces, nephews, cousins, and in-laws. Funeral Services will be held Monday April 26, 2021 at the Nowata First Church of God with Pastor Tom Tanquary officiating. Interment will be at the Ball Cemetery, Childers, OK. In lieu of flowers the family asks donations to be made to Delaware First Baptist, Masonic Lodge, American Legion, or your local VFW.

Richard Lee Riley SR. went to be with our Lord and Savior on April 20, 2021 at his home in Delaware, OK, he was 90. Richard was born January 21st, 1931, the second of 16 children to Thomas Marion and Lettie Mae (Woods) Riley in Nowata, OK. Richard... View Obituary & Service Information

The family of Richard Lee Riley Sr. created this Life Tributes page to make it easy to share your memories.

Richard Lee Riley SR. went to be with our Lord and Savior on...

Send flowers to the Riley family.