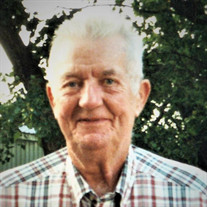 Richard Dean “Dick” Nunneley was born on November 4, 1931 in Tulsa, Oklahoma to Virgil Windfield and Ola Grace Henderson Nunneley. He passed away peacefully at The Journey Home on May 14, 2021. He was raised and attended schools in Tulsa, OK, graduating from Central High School with the class of 1950. He was named an Oklahoma All-State basketball player in 1950 and attended the University of Tulsa on a full basketball scholarship, graduating with the class of 1954. Dick was honored by the University of Tulsa by being named to the Athletic Hall of Fame in 1985. As the fourth player to be so named, his plaque read: DICK NUNNELEY “A three-time All Missouri Valley Conference selection as a guard. He led the Golden Hurricanes in scoring with a 17.3 average as a senior, 13.1 average as a junior and 15.8 average as a sophomore. As a superb outside shooter who ranked among the top scores in the Missouri Valley Conference for three years, averaging 15.6 points throughout his career. Selected by his teammates as Tulsa’s most valuable player for the 19 53–54 season.” After graduation from TU, he began his employment with Phillips Petroleum Company in 1954 and retired in 1992, after 38 years with the company. He married Mary Ruth Metzinger on August 29, 1952 at Holy Family Cathedral in Tulsa, OK. They had three children, Richard Dean Nunneley, Jr.; Michael Ray Nunneley; and Mary Kathleen Nunneley Godwin. His interests were basketball, golfing, fishing and picking up pecans. He loved his grandchildren and all his little great grandchildren and loved receiving calls, pictures and hearing stories about them. He was predeceased by his parents, Virgil Windfield and Ola Grace Nunneley; his wife, Mary Ruth Metzinger Nunneley; his sons, Richard Dean Nunneley, Jr. and Michael Ray “Mike” Nunneley; his special Aunt, Golda Josephine Nunneley; and his brother, Jerry Windfield Nunneley. He is survived by his daughter, Mary Kathleen Godwin (Ron) of Bartlesville, OK; his daughter-in-law Kathy Nunneley of Harrah, OK; his brother, James K Nunneley (Muffie) of Willow Street, PA; Grandchildren Bradley Nunneley (Kari) of McLoud, OK, Kyle Nunneley (Heidi) of Newalla, OK, Sarah Godwin John (Brian) of Chanute, KS, Benjamin Godwin (Charlsie) of Big Spring, TX; step-grandchildren, Ashley Algrim (Kirk) of Oologah, OK and Jordan Godwin of Riverside, MO; along with great grandchildren Kylie & Barrett Nunneley, Kate & Ethan Nunneley, Sadie, Sam & Benjamin John and Oliver & Gwendolyn Godwin; step grandchildren Taylor Algrim, Madyson Most, Zoey Algrim and Ivy Godwin, and several special nieces nephews and cousins. In lieu of flowers, donations can be made to the local Salvation Army, The Journey Home of Bartlesville or The University of Tulsa Athletic Dept. Dick’s Celebration of Life will be held at the Chapel at Stumpff Funeral Home, officiated by his grandson, Lt. Benjamin Luke Godwin, 1600 SE Washington, Bartlesville, OK 74006 AM at 11:00 am on Saturday, May 29, 2021. Arrangements and interment entrusted to the Stumpff Funeral Home of Bartlesville, Oklahoma, with private family burial at Oak Hill Cemetery in Drumright, OK next to his wife, Mary.

Richard Dean &#8220;Dick&#8221; Nunneley was born on November 4, 1931 in Tulsa, Oklahoma to Virgil Windfield and Ola Grace Henderson Nunneley. He passed away peacefully at The Journey Home on May 14, 2021. He was raised and attended schools... View Obituary & Service Information

The family of Richard Dean "Dick" Nunneley created this Life Tributes page to make it easy to share your memories.

Send flowers to the Nunneley family.