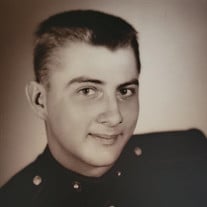 Richard Craig McDonald died on October 19, 2021, at Journey Home in Bartlesville, Oklahoma. He was born on November 2, 1931, in Oklahoma City. His parents were Russell G. and Pauline Jones McDonald. Dick graduated from Classen High School in 1949 and attended Oklahoma A&M College. In February 1951, shortly after the beginning of the Korean War, Dick enlisted in the Marine Corps. Promoted to sergeant early in 1952, he was commissioned a second lieutenant in November of that year. Dick was an infantry officer, serving as a platoon and company commander in the 1st and 3rd Marine Divisions. He was commander of Naval Task Group 115.5, a force composed of U.S. Navy and Vietnamese SEALS, in 1968. In 1969 he was assigned as Commanding Officer of the 2nd Battalion, 28th Marines, the unit made famous in WWII for raising the flag on Iwo Jima. Dick was promoted to colonel in 1974. After two years as Director of Security and Law Enforcement for the Marine Corps, he was sent to the western Pacific where he commanded the 31st Marine Amphibious Unit, a 2,000-man air and ground combat team. Dick was a graduate of the Army Advanced Infantry Officer’s Course (with honors) and the FBI National Academy. During his thirty years of duty he served in Korea, the Philippines, Okinawa, Mainland Japan, Vietnam and Thailand. Dick was awarded the Legion of Merit three times, one with combat V, the Bronze Star with combat V, and the Vietnamese Gallantry Cross with Bronze star. Dick married Barbara Barker, a Bartlesville native, in September 1951; they had met while both were students in Stillwater. Their daughter, Linda, was born in Bartlesville while Dick was overseas; David was born in the Philippines and Joseph at Quantico, Virginia. In 1990 they adopted their granddaughter, Christi. Following retirement from the Marine Corps in 1981, Dick, Barbara, and Joe came to Bartlesville. Dick went to the Oklahoma Farriers College, and then was chief instructor there and the local horseshoer. He later worked for II Morrow, Inc, a UPS subsidiary, as product manager for automatic vehicle locating systems. In 1992, Dick assisted in the formation of the International Consortium for Research on the Health Effects of Radiation and subsequently became the Executive Director. The Consortium centered it’s work on the effects of the Chernobyl nuclear accident, receiving annually renewable grants from the Office of Naval Research for twelve years. The research results, completed in 2004, relating to leukemia and thyroid cancer incidence in the radiation-contaminated areas of Belarus, Russia and Ukraine, were reported in twenty-five published scientific papers and abstracts. Locally, Dick was an emeritus director, past president and treasurer of ARC Industries (now EmployAbility, Inc.), long-time president and director of Washington County Association for Retarded Citizens, and elder of the Good Shepard Presbyterian Church. Dick was preceded in death by his wife, Barbara; son David and daughter Linda. He is survived by his son Joseph McDonald of Bartlesville; daughter Christi Coke and husband Cody, grandson River of Dewey; sister Gayle Cox; companion for many years Janet Mayo Hardin, and numerous other family members and friends. Come and go visitation will be Tuesday, October 26, 2021, from 9am to 8pm at Stumpff Funeral Home. Graveside services will be Wednesday at 10am, with full military honors, at Memorial Park Cemetery. Church service will then be held after at 11am at Good Shepherd Presbyterian Church in Bartlesville. Services are under the direction of Stumpff Funeral Home. Legacy Touch Pin: DRDZ3YHY

The family of Col. Richard "Dick" Craig McDonald created this Life Tributes page to make it easy to share your memories.

Send flowers to the McDonald family.