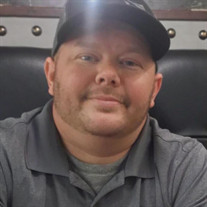 Richard “Kiel” Lucy, 38, a longtime resident of Bartlesville, passed away comfortably at home on August 26, 2021. Kiel was born to Richard Kapp Lucy and Angela Lynn Cluts on April 6, 1983, at St. Francis hospital in Tulsa, Oklahoma. Kiel attended Dewey Middle School and graduated from Dewey High School in 2002. While in middle school, he met the love of his life, Jaclyn “Casey” Lucy. They married September 10, 2005. Out of this marriage came a daughter, Jadyn and a son, Rian. Kiel enjoyed hunting, fishing, camping and being with his family. Kiel was employed at Bartlesville Health and Rehab as a maintenance Supervisor until the time of his passing. Kiel was preceded in death by his grandpa John Cluts, and grandparents Dick and May Jo Lucy. He is survived by the love of his life Casey, daughter Jadyn, son Rian, Mother Angela, dad Richard and wife Nitzia, mother-in-law Cheri and Jack, father-in-law JR. Flud, Grandma Barbara, Sister Heidi and husband Brian, Sister-in-law Carie Beth, nieces Raylee and Taylor and nephew Trenton, and many friends that are considered family. A memorial service for Kiel will be held on September 4, 2021, at Tri-county Tech in the Osage Room at 10 AM. In Lieu of flowers there will be a college fund for Jadyn and Rian Lucy. Contributions can be made to Pay pal Lucy4KcJr. A celebration of life to follow at Copan Point pavilion for family and Kiel’s close friends.

The family of Richard "Kiel" Lucy created this Life Tributes page to make it easy to share your memories.

Send flowers to the Lucy family.