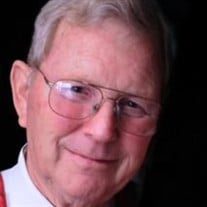 Richard “Glenn” Blackburn passed away peacefully the morning of Sunday, February 27, 2022, with the love of his family surrounding him, at the age of 87. He will be lovingly remembered by his children: Christopher Blackburn of Pryor, Oklahoma and Tina Cooper of Princeton, Texas; grandchildren, Austin Fisher, Dylan Fisher, and wife Kensey Fisher, of Princeton Texas, Gavin Pierce of Bartlesville, Oklahoma; and great-grandchild, Elliott Fisher of Princeton Texas; his brother, Julian Blackburn of Winston-Salem, North Carolina; sister, Patsy Williams of Winston Salem, North Carolina. He was predeceased by his loving wife of 60 years, Thelma Blackburn; his brother Perry Blackburn; and his parents Lonnie and Audrey Blackburn. He will also be dearly missed by his many dear lifelong friends, including Larry and Shona Bates of Bartlesville, Oklahoma, Tom and Judy Chamberlin of Bartlesville, Oklahoma, and many friends and companions at Tallgrass Estates. Glenn was born on November 7, 1934, in Ingold, North Carolina. He grew up on a farm and would enjoy gardening throughout his life. After graduating high school, he joined the United States Air Force and was stationed in Bermuda. After his honorable discharge, he went on to attend college at Atlantic Christian College in Wilson, North Carolina where he met the love of his life and best friend, Thelma Pope. Glenn began his lifelong career with Phillips Petroleum Company in Raleigh, North Carolina. He would travel extensively with Phillips but eventually settled in Bartlesville, Oklahoma in 1976. He retired after 37 years of employment. It was during this time he spent his time golfing (especially proud of his hole-on-one!), traveling, and playing cards with friends. He was active in the Men’s Club at the Phillips 66 Activity Center, Sons of the American Revolution, St. Luke’s Episcopal Church, and the “morning coffee group” at Arvest Bank. A Celebration of Life service will be held at 3:00 p.m. on Saturday, March 12, 2022, at St. Luke’s Episcopal Church, 210 E. 9th Street, in Bartlesville, Oklahoma. In lieu of flowers, Glenn requested donations be made to the Disabled American Veterans Service, P.O. Box 14301, Cincinnati, OH, 45250-0301. The family wishes to send a special thank you to the staff of Shelly’s CNA Service for their amazing care, compassion, and friendship.

Richard &#8220;Glenn&#8221; Blackburn passed away peacefully the morning of Sunday, February 27, 2022, with the love of his family surrounding him, at the age of 87. He will be lovingly remembered by his children: Christopher Blackburn of... View Obituary & Service Information

The family of Richard Glenn Blackburn created this Life Tributes page to make it easy to share your memories.

Send flowers to the Blackburn family.