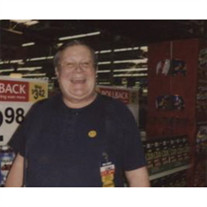 Funeral services for Rev. Dennis Carlton Jones, 65 of Skiatook, Oklahoma will be held Saturday, October 1, 2011 at 10:00 a.m. at the United Methodist Church, in Skiatook with Pastor Norman Wasson officiating. Interment in Osage Garden Cemetery in Skiatook, Oklahoma will be under the direction of Peters-Stumpff Funeral Home. Casket bearers for the service will be Curtis Brecken, Steven Hicks, Ireland Brock, Chuck Allred, Matt Bertwell and Bobby Rosser. Musical selections for the service are "There's A Balm In Gilead" and "The Lord Of The Dance" with vocalist Robin Edens, Kathy Allred and Beverly Dollar and pianist Debbie Seals.. Dennis passed away on September 27, 2011 in Skiatook, Oklahoma. He was born March 28, 1946 in Oklahoma City, Oklahoma to Henry C. and Lucile (Minton) Jones. Dennis was a graduate of Northwest Classen High School. He continued his education and received his bachelor degree from the University of Central Oklahoma and his Masters of Divinity from the Phillips Theological Seminary. He served his country in the United States Army during the Vietnam War from 1967 to 1969. He married Cherlyn Hannaford on June 10, 1967. In 1978 he entered the Ministry of the United Methodist Church. He served congregations in Ochelata, Kremlin, Claremore, Davis, El Reno, Sentinel, Rocky, Lawton, Yale and Meramec. He retired from the Ministry in 2008. After retirement he worked as a greeter at Wal-mart, where customers enjoyed his cheery greeting and friendly welcome. He is survived by his wife Cherlyn of the home, a sister Donna Prawdzienski and husband Richard of Edmond; two daughters: Rachael of the home, Christina Bertwell and husband Matthew of Skiatook; four grandchildren: Dustin and Dillon Odom, Mallory and Bellamee Bertwell, six nieces and a number of cousins and a host of friends. He was preceded in death by his parents, and granddaughter Bethaney Odom.

The family of Rev. Dennis Carlton Jones created this Life Tributes page to make it easy to share your memories.