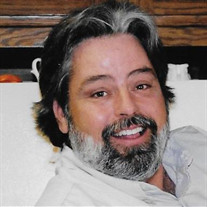 Randy Layne Crawford, 60, of Bartlesville, Oklahoma, died Monday, August 31, 2020. Randy was born June 29, 1960, in Bartlesville, to parents Willis “Butch” Ross and Charlotte June (Sandell) Crawford. He worked in construction for Doug Hough Homes and Dan Hough Homes. He worked on many of the new homes in Bartlesville. One of his specialties was trim carpentry, in which he was a perfectionist. Randy married Janet Leigh Elias on August 31, 2001. The day he passed away the couple celebrated their 19th wedding anniversary. He loved being outdoors. He enjoyed boating and spending time at the lake with friends at the Cherokee Yacht Club at Grand Lake, where he was known as the mayor of B Dock. His favorite trip was to the Smokey Mountains, where he enjoyed looking at the mountains and watching the fog roll in. Randy collected Phillips 66 memorabilia and enjoyed the hunt looking for it with his wife. He also enjoyed gardening and landscaping his backyard. He loved working with wood and made many pieces of furniture for his home. Although he had many hobbies, the most important thing in his life was spending time with his three children and grandchildren. His family was his life and he will be missed by all! He was preceded in death by his mother and father. Randy is survived by his wife, Janet Crawford; daughter Angela Kinney and husband Drew; son Chance Crawford; daughter Brittney Layne Crawford; grandchildren Nathan Blaylock, Sam Blaylock, Lucas Kinney, Payden Crawford, Caydie Crawford, Scarlett Crawford and Riley Crawford; brothers Greg Crawford and fiancé Janell Bradley and Chris Crawford and a host of loving family and friends. A memorial service will be held on Friday, September 4, 2020 at Stumpff Funeral Home Chapel at 2pm.

The family of Randy Layne Crawford created this Life Tributes page to make it easy to share your memories.

Send flowers to the Crawford family.