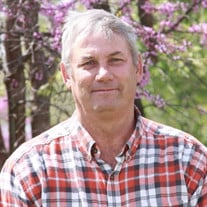 Randall Wayne Fitzsimmons, of Copan, Oklahoma went to be with the Lord on September 21, 2021, at the age of 63. Funeral Services will be on Saturday, September 25, 2021, at 10:00 am in Copan, Oklahoma at the First Baptist Church Copan. Place of interment will be in Dewey, Oklahoma. Funeral services are under the direction of Stumpff Funeral Home and Crematory. Randy was born on October 17, 1957, in Broken Arrow, Oklahoma to Marvin Floyd Fitzsimmons and Gloria Ann (Goodson) Fitzsimmons. He attended school in Wann, Oklahoma and college at Oklahoma State University in Stillwater, Oklahoma graduating with an Agriculture Engineering degree. Randy worked as a farmer and rancher at the Bar 5 Ranch. He married Debbie Still on September 7, 1980, and they had three children, Matthew Fitzsimmons, Kristen Fitzsimmons Crane, and Niki Fitzsimmons Fielder. Randy enjoyed serving as a deacon at his church, chairman of the Washington County Rural District # 5, farming and was an unmatched mechanic, a Mr. Fix-Anything who would help anyone. His life-long desire was meeting his Lord face-to-face!! Randy was preceded in death by his mother and father, Gloria and Floyd Fitzsimmons, his paternal grandparents, Lora Sells and Bob Fitzsimmons, his maternal grandparents, Bernice and Oscar Goodson, and great nephew Nathan Fitzsimmons. Randy is survived by his wife Debbie Fitzsimmons, his son Matthew Fitzsimmons and wife Tiffany, daughter Kristen Crane and husband Jason, daughter Niki Fielder and husband Vance; granddaughters Lucy & Alice Fitzsimmons and Madi Fielder; brother Robert Fitzsimmons and wife Pat, nephew Justin, Julie, Noah, and Nash Fitzsimmons, niece Julie, Spencer, Olivia, and Coleman Magana, nephew Jeff, Aspyn, and Ava Fitzsimmons, sister Nancy Trevathan, niece Natalie and Hensley Loyall. Flowers can be sent to Stumpff Funeral Home and Crematory or donations may be made in Randy’s name to the Copan First Baptist Church or the charity of your choice.

Randall Wayne Fitzsimmons, of Copan, Oklahoma went to be with the Lord on September 21, 2021, at the age of 63. Funeral Services will be on Saturday, September 25, 2021, at 10:00 am in Copan, Oklahoma at the First Baptist Church Copan. Place... View Obituary & Service Information

The family of Randall "Randy" Wayne Fitzsimmons created this Life Tributes page to make it easy to share your memories.

Randall Wayne Fitzsimmons, of Copan, Oklahoma went to be with...

Send flowers to the Fitzsimmons family.