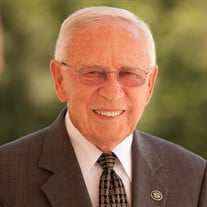 Ralph Jackson, of Bartlesville, passed away on August 23, 2020 at the age of 85. Ralph was born on October 29, 1934 in Manchester, KY. After graduating high school in 1953, he moved to Detroit, MI and immediately began working for GM Corporation. At the same time, he was attending night school at Henry Ford College to pursue an engineering degree. In January of 1957, he went into the army and spent two years with the armed forces. For sixteen months of that time, he served in Korea. After returning from Korea, he returned to his schooling and employment with GM Corporation until 1962. At that time, he began his career in design engineering with Ford Motor Company in Dearborn, MI. He married Margaret Gibson in April of 1965. They made their home in Plymouth Michigan. They had two daughters and stayed very busy with their activities. Ralph served as an Elder at the Plymouth Church of Christ for 16 years. After retiring from Ford Motor Company in 1995, they made their home in Bartlesville, which was prompted by their two daughters living there at the time. He began his work with the Dewey Church of Christ serving as an Elder. He loved his Church Family. Ralph went to work part time for Stumpff Funeral Home, where he really enjoyed his work. He loved his family dearly and stated "as Lou Gehrig, the great professional baseball player said, I am the luckiest man on the face of the earth." Ralph was preceded in death by his parents, four sisters, and two brothers. He is survived by his wife, Margaret (Gibson) Jackson, of Bartlesville, daughter Janet Sanders and husband Doug, of Bartlesville, daughter, Lisa Bell and husband Lee, of Brandon, FL., two sisters, Gladys Blackwell and husband Larry of Ohio, and Buelah Coldiron of Kentucky, one brother, Ted Jackson, of Barbourville, KY. He had five grandchildren, Rebekah Sanders, Collin Sanders, Benjamin Bell, Andrea Bell, and Lauren Bell. Memorial service will be held at the Dewey Church of Christ at 10 am on Friday, August 28. In lieu of flowers, donations can be made to St. Jude Children's Research Hospital, 501 St. Jude Place, Memphis, TN 38105. Friends who would like, may sign the online guest book and leave condolences at www.stumpff.org.

Ralph Jackson, of Bartlesville, passed away on August 23, 2020 at the age of 85. Ralph was born on October 29, 1934 in Manchester, KY. After graduating high school in 1953, he moved to Detroit, MI and immediately began working for GM Corporation.... View Obituary & Service Information

The family of Ralph Jackson created this Life Tributes page to make it easy to share your memories.

Send flowers to the Jackson family.