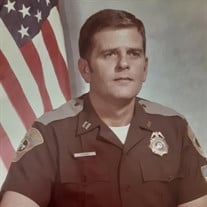 Mr. Ralph Josiah “Corky” Davis, 84, of Bartlesville, died at 1 PM on Friday, July 23, 2021 at the Jane Phillips Medical Center in Bartlesville. Funeral services will be held at 10 AM on Thursday, July 29, 2021 in the Stumpff Funeral Home Chapel. Interment will be in the Fairview/New Zion Cemetery at Cushing, Oklahoma directed by the Stumpff Funeral Home & Crematory. The Davis family will receive guests for visitation at the Stumpff Funeral Home on Wednesday from 4 PM until 8 PM. Mr. Davis was born at Cushing, Oklahoma on December 8, 1936 the son of Ralph Josiah Davis and Gussie May Millinger. He grew up and received his education in Cushing where he graduated from Cushing High School in 1956. He was married to Cherrie Marean Hesser on October 20, 1956 at Cushing. They made their home briefly in Bartlesville and Cushing until Mr. Davis entered the United States Army in January of 1958. He was released from active duty in January of 1960 and received his Honorable Discharge in December of 1963. Mr. Davis joined the Bartlesville Police Department in 1960 and served with them until his retirement in 1980 as a Captain and Assistant to the Chief. Mr. Davis had attended TU and numerous law enforcement related courses including the FBI Academy and had also been active as an instructor in different law enforcement courses. Following his police retirement, he was employed by the Osage County Assessor’s Office for 20 years and then had his own pipeline surveying business for several years. He loved working cattle, riding horses and loved to play music. He was a master steel guitarist and for years had the Corky Davis and his Cowboy Swing Band and they played in various locations in Bartlesville including OK Mozart and First Baptist Church as well as in the surrounding areas and at Branson, Missouri. He was a member of the Steel Guitar Association. Survivors include his wife, Cherrie Davis of the home, three sons, David Davis and wife Cheryl Ann of Jay, Oklahoma, Randy Davis and wife Jan Webster of Skiatook, Oklahoma and Robert Charles Davis of Bartlesville, 11 grandchildren and 20 great grandchildren. He was preceded in death by his parents, 2 sisters, 2 brothers and a grandchild, Taylor Ray Davis.

The family of Ralph "Corky" Josiah Davis created this Life Tributes page to make it easy to share your memories.

Send flowers to the Davis family.