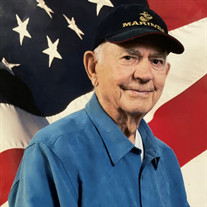 RJ George passed away peacefully at his home in Bartlesville, Oklahoma on Tuesday, March 1st. He was 97 years old. He is predeceased by his brother, Orvin Kenneth George, and his sister Norma George Bollinger Collins. RJ is survived by his sister Jimmie Dean Campbell of West Frankfort, IL. As well as his loving, devoted wife, his sweetheart of 71 years, Donna Mae. They were married in So. St. Paul, Minnesota on July 1, 1950. Together they have five children: Nancy Louise Eaton (Ken), Stuart Wayne George (Sandra), Aleta Susan Ford (Greg), Cindy Althea Wood, and Scot Neal George. He is lovingly remembered by his 11 grandchildren: Joshua George, Jason Ford, Ryan George, Amber Perkins, Amber George, Daniel Eaton, Steven Elmore, Evie Scherrey, Angela Gleason, Scot Ford, and William Wood, as well as 19 great-grandchildren and numerous nieces and nephews. Psalm 127:3 states, “Children are a gift from the Lord, they are a reward from him.” RJ embodied this scripture throughout his life with a genuine ear-to-ear grin, and a sparkle in his eye whenever the little ones were nearby, even unto his last days. RJ was born in Formosa, Arkansas on July 15, 1924. He was a WWII Veteran serving as a member of the United States Marine Corps, 4th Division, in Saipan, Tinian, and Iwo Jima, witnessing the iconic raising of the US flag in the latter. After the war, RJ attended Rolla School of Mines in Rolla, Missouri. In 1950 he graduated with a Civil Engineering degree. He worked for H.C. Price Company from 1952 - 1982, traveling and living in locations all across the United States, as well as Canada and Mexico. Most notably he served as the Superintendent of Section 4 of the Trans Alaskan Pipeline System from the Yukon River to Delta Junction in the state of Alaska. RJ retired to pursue ranching as a cattleman, as well as small operation oil prospecting, and resided on the beloved family farm, “Lucky 7 Ranch”, just outside Bartlesville city limits for almost 50 years. In addition to being a cattleman and farmer, RJ also enjoyed hunting and fishing, sharing many adventures with his children, grandchildren and great-grandchildren. RJ was also a skilled woodworker, and took interest in blacksmithing, as well as raising Tennessee Walking Horses and Border Collies. He volunteered with his local church in many capacities, ranging from senior adults to the children’s ministries, and he and Donna opened their home to several children in foster care throughout his life. Above all, RJ held an unwavering faith in Jesus Christ as his Lord and Saviour from the age of 10 and lived a shining example of a Christian life with love and devotion in his home, compassion for his neighbour, dignity in his workplace, integrity in his choices, and with joy and patience for all of God’s children. A memorial service will be held on Saturday, April 2, at 2pm at Bartlesville First Baptist Church. Memorial donations may be made to either Washington County Disabled American Veterans Chapter 65, 300 E. Angus Avenue, Dewey, OK 74029; or Oklahoma Baptist Children’s Home, 12700 East 76th Street North, Owasso, OK 74055

RJ George passed away peacefully at his home in Bartlesville, Oklahoma on Tuesday, March 1st. He was 97 years old. He is predeceased by his brother, Orvin Kenneth George, and his sister Norma George Bollinger Collins. RJ is survived by his... View Obituary & Service Information

The family of R.J. George created this Life Tributes page to make it easy to share your memories.

RJ George passed away peacefully at his home in Bartlesville,...

Send flowers to the George family.