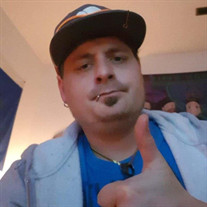 Patrick Wayne McGowan or “Shooter,” age 33, passed away after a well-lived life on May 18, 2022. He was born October 19, 1988, to Douglas, and Lori (King) McGowan, in Tulsa, Oklahoma. He was a 2007 graduate of Bartlesville High School, and attended NSU, in 2009 he obtained an NEO Associates Degree and between 2010 – 2013 took Environmental Science classes. He had an adventurous career working as a Sous chef, Apartment Manager, and various other trades, for companies such as Sodexo, Superior Linen Service, and Hilltop Management Services at locations like Bin 35 Bistro, Summit Club, and Fleming’s Prime Steakhouse. Patrick had many hobbies and interests, especially loving music and playing his guitar, playing his X-box, tracking weather and he was an avid football fan, especially OSU, the Green Bay Packers, and Ally Racing #48. One of his favorite moments in life was acquiring his special cat, Kittyman-Tiger. Patrick was preceded in death by his mema and papa, Betty and George McGowan, and his uncle David McGowan. He is survived by his parents, Doug and Lori McGowan, his aunt, Barbara McGowan, uncle, Dan McGowan and his wife Patti McGowan, his grandparents, Don and Sue King from Pennsylvania, his aunt, Wendy Bisazza, from Pennsylvania, and his cousins, Michael McGowan, Monica Culver, John Perkins, and Brian Perkins. Memorial contributions can be made to any organization that helps with depression, mental health, and the SPCA.

The family of Patrick Wayne McGowan created this Life Tributes page to make it easy to share your memories.

Patrick Wayne McGowan or “Shooter,” age 33, passed away after...