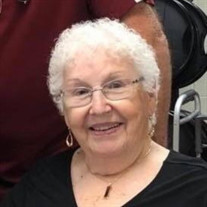 Our precious mother, Patricia (Patty) Watters, was called home by God on Monday, July 27, 2020. Patty was born to Robert and Nova (Gatewood) Cox on September 15th, 1938. She married the love of her life, John Edward Watters, on October 5th, 1954. They were married for almost 58 years. She was a life long resident of Bartlesville. She was a full time homemaker and mother who raised her children to love and respect God. She was always active in her church being a Sunday School teacher, singing in the choir to working in the church office. After her family was raised she worked at the Examiner-Enterprise and 21st Sensory until retirement. She enjoyed singing at church and preforming with Sweet Adeline’s and the Bartlesville Community Singers. Patty was well know as a great cook. Her pies were always in high demand. Patty was preceded in death by her parents, Robert and Nova Cox, her husband, John Watters, her brothers, James and Donald Cox, her sister, Judy Conklin and her son-in-law, Bob Levingston. She is survived by her brothers Pete and David Cox, her sister and brother-in-law, Cathy and John Davis. Her children, Kassandra (Sandy) Levingston, her sons and their wives, Mike and Mary, Jeff and Sandy and Jeremy and Rachel Watters. Her grandchildren, Anne Compton, James Preston, Rachel and Jesse Monday, Jessica Watters and Nick Pate, Dylan Villeneuve, Lucas and Tobias Watters. Also her beloved cousin, Jerry Cox, along with several great grandchildren and numerous nieces, nephews and cousins. She will also be missed by her many friends. Visitation will be available from Thursday afternoon until 5PM , and from 9 AM until 5 PM on Friday, Saturday and Sunday at Stumpff Funeral Home in Bartlesville. A celebration of her life will be held at Trinity Baptist Church at 2:00, August 3rd, 2020. Brother Ed Gordon will officiate. If chosen, in lieu of flowers, donations can be made to the Diabetes Research Institute Foundation (DRIF).

Our precious mother, Patricia (Patty) Watters, was called home by God on Monday, July 27, 2020. Patty was born to Robert and Nova (Gatewood) Cox on September 15th, 1938. She married the love of her life, John Edward Watters, on October 5th,... View Obituary & Service Information

The family of Patricia (Patty) Watters created this Life Tributes page to make it easy to share your memories.

Send flowers to the Watters family.