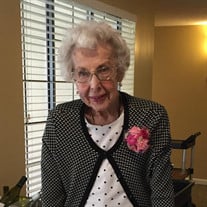 A reception honoring the life of Pat Shaub will be from 1 PM to 3 PM on Saturday, December 18, 2021 in the Chapel at Green Country Village Independent Living Facility, 1025 Swan Drive, Bartlesville. Refreshments will be served. Those attending are encouraged to share memories and stories about Pat and her remarkable life. Non-residents will be screened upon entrance and will be required to wear masks until they are in the chapel. Patricia Jurgens Shaub, 97, passed away peacefully at her home in Green Country Senior Living Center on Monday, December 13, 2021. Pat was known for her sense of humor, her ready smile and her upbeat and positive personality. Pat was born in Ogden, UT on August 3, 1924 to Fred P. Jurgens and June (Forshay) Jurgens. She attended school in Ogden and attended Weber College in Ogden for two years. After studying at Stanford University and the University of Denver, Pat graduated from the University of Utah with a bachelor’s degree in Radio Drama and Speech. She married fellow Utah graduate Donald P. Shaub in 1948, and they immediately moved to Bartlesville, where Don had accepted work as an engineer with Phillips Petroleum Company. They were married for 68 years and had four children. Pat and Don lived in many different places around the world during Don’s career with Phillips. She especially enjoyed her times in Australia and London. Pat always looked on each new move as an exciting opportunity for new adventures. She maintained friendships with many people she had met over the years and was always happy to make new friends. Pat was a long-time member of First Presbyterian Church, where she served in many different leadership and creative positions. She was also active in the Hillcrest Ladies’ Golf Association and Stock Club. She was a member of the board of the Bartlesville Library Association. Pat was also active in drama in Bartlesville, acting in plays for the former Bartlesville Little Theater and serving on its audition committee. She formed a puppet ministry at First Presbyterian where she wrote scripts and directed puppeteers for several years. The main passion and service of Pat’s life, as well as in her husband Don’s life, was advocating for people with intellectual disabilities. Their youngest child, Laurie (Carmody) was intellectually disabled in the time before federal law made special education available to all special needs students. Pat and Don refused to accept that they would need to institutionalize their daughter, so they advocated with Bartlesville Public Schools to offer special education classes. They even raised money for the salary of the first special education teacher in the school system! They joined the small fledgling group Washington County ARC and began the ARC Thrift Shop, which survives today as Employability. They worked with other parent advocates to create a so-called “sheltered workshop” that would employ intellectually disabled people once they were out of school. That operation led to today’s AbilityWorks program. They championed group homes and other causes to improve the lives of the intellectually disabled. They served on the Board of Directors of ARC for over 20 years. Pat was recognized by the Allied Arts and Humanities Council of Bartlesville with the Local BART Award in 2008. Pat is survived by her daughter Diana Fererro and husband Jim, her daughter Wendy Leader and her son Mark Shaub. She had 6 grandchildren - Jenny Fererro, Katy Fererro, Matt Leader, Nick Leader, Bess Leader and Léonora Shaub. She also had 4 great-grandchildren - James, Mac and Benny Nichols and Zephyr Pierson. She was preceded in death by her parents, her sister Beverly Welti, her husband Don Shaub and daughter Laurie Carmody. The family asks that anyone wishing to make a donation in Pat’s name send their monetary gifts to Employability of Bartlesville, 501 S. Virginia Ave., Bartlesville, OK 74003, or donate online to http://abilityworksok.org.

A reception honoring the life of Pat Shaub will be from 1 PM to 3 PM on Saturday, December 18, 2021 in the Chapel at Green Country Village Independent Living Facility, 1025 Swan Drive, Bartlesville. Refreshments will be served. Those attending... View Obituary & Service Information

The family of Patricia Jurgens Shaub created this Life Tributes page to make it easy to share your memories.

A reception honoring the life of Pat Shaub will be from 1 PM...

Send flowers to the Shaub family.