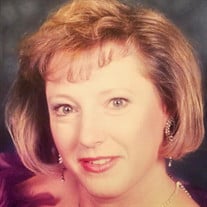 Pamela Ann Markham Mueller was born on February 24, 1958 to Richard and Patricia Markham in Chanute, Kansas. She passed from this life into Heaven on April 9, 2021 and was preceded in death by her parents, Richard and Patty, and her Nana, Mable Main. She was the first grandchild in a family of Uncles and Aunts and was roundly spoiled by all of them in her early years. Wonderful Super 8 video shot by Richard shows her squinting on Christmas morning as she went through her vast stockpile of Christmas presents all by herself. She was eventually joined by her sister, Debbie, and they grew up together getting into a minimal amount of trouble. They enjoyed being spoiled on trips to Cherokee, Oklahoma to visit their Nana, Mable Main, and had great stories to tell about those summer visits over the years. Pam enjoyed music and took piano lessons in her youth, playing the piano at her church in her teen years. She was also a part of the Chanute High School Drum and Bugle corps during her high school years. She enjoyed riding her bike and playing tennis along with work at the local grocery store and KFC. She met David Mueller at Rock Springs Ranch in the summer of 1974, where he had gone to attend the Kansas Youth Camp along with his Western Kansas cousins. They began to write and visit one another and soon fell in love and had their wedding on June 25, 1977, at Chanute Methodist Church. They lived in Enid, OK for the first three years of Dave’s teaching career, where she was the executive secretary to one of the VP’s at First National Bank in Enid. The family returned to Bartlesville upon the birth of their first son, Christopher, in March of 1981, and Jonathan followed in October of 1982. Pam was a wonderful mother to the boys and gave them all of her attention as a stay-at-home Mom. It would be that way until Andrew was born in November of 1988, making the home complete. About that time she began her career in real estate working for Mueller Development, and eventually found herself at McAnaw and Wright where she perfected her craft and became a real estate superstar. She was highly successful and loved her work even as aggressive secondary progressive MS was diagnosed in February of 2000, followed shortly after by a diagnosis of cortical and subcortical dementia. She fought hard against both of those and we are thankful to Dr. Gabriel Pardo of Oklahoma City for his work to help stymie the MS for a time with some aggressive chemo treatments of his own, giving her an ability to walk and be ambulatory for most of the rest of her life. These diseases are relentless and eventually took her memories and ability to live a normal life as daughters in law Emily, Katie and Meghan entered the picture. Grandchildren soon followed, Cayden and Caleb to Chris and Emily. Grace, Molly, and Jack to Jon and Katie. Emma to Andy and Meghan. Pam would have been such a great treat to all of them in her fun activities and planning, making life more enjoyable and noteworthy in her being with them. This is a particularly cruel aspect of her life, that she was not able to enjoy it in the way God created it to be, nor were others able to enjoy her considerable gifts after her long illness took them from her. Pam experienced some great years at Daybreak in Bartlesville, where she was able to attend classes and do activities with helpful staff at least three days a week from 2010-2021. When given a choice she always said she didn’t want to go, but then would decide to attend in given the choice of staying home or going. This allowed Dave to work at school and not worry about her being on her own for quite some time, for which he is grateful. The last two to three years of her life she became increasingly fragile and it was difficult to get her to eat and drink as she should. The pandemic was especially hard on her as it took away her sense of routine and didn’t allow her to leave the house for many months. She returned to Daybreak from July 2020 to February of this year, but was in a wheelchair during those months and grew increasingly fragile. An illness in February led to a stay in the Jane Phillips ICU and hospital, followed by being transported to Journey Home hospice on her 63rd birthday with a diagnosis of two weeks or less to live. She rallied and fought back for quite some time, spending time with Deb, her boys and others who came to visit during that time. The Journey Home and Comforting Hands hospice are to be thanked for their patient and loving care with her during this time, they can’t be thanked enough for what they did to make her final days and hours as comfortable as possible. Pam is survived by her husband, Dave, of the home in Bartlesville, OK. By sons Chris/Emily (Cayden, Caleb) of Tyler, Texas; Jon/Katie (Grace, Molly, Jack) of Las Colinas, Texas; Andy/Meghan (Emma) of Oklahoma City; and her sister Deb Boone and husband Merle of Chanute, Kansas, along with niece Jesse Harryman and nephew Tanner Boone and their children. She was a bright creation of God that was dimmed much too soon. All of us are glad that she is now restored to her full body and mind, and relish the day that we will see her again. Contributions to The Journey Home can be made in Pam’s honor and memory. They are a local gem in our community that deserves recognition and support. Donations may be sent in Pam’s name to The Journey Home, 900 NE Washington Blvd, Bartlesville, OK 74006.

Pamela Ann Markham Mueller was born on February 24, 1958 to Richard and Patricia Markham in Chanute, Kansas. She passed from this life into Heaven on April 9, 2021 and was preceded in death by her parents, Richard and Patty, and her Nana, Mable... View Obituary & Service Information

The family of Pamela Ann Mueller created this Life Tributes page to make it easy to share your memories.

Pamela Ann Markham Mueller was born on February 24, 1958 to Richard...

Send flowers to the Mueller family.