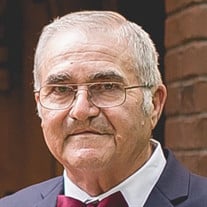 Orville Dean Johnson – OJ – 76, of Dewey, passed away early Wednesday morning at home following a long battle with cancer. He was born on September 20, 1943 to Henry and Victoria (Hendrix) Johnson in Barnsdall, Oklahoma. Growing up in Nelagoney, Oklahoma, he attended Nelagoney schools, and graduated top of his class in 1961. In September 1962, he joined the United States Air Force, serving his time during the Vietnam War. He became a fire fighter supervisor and superintendent, specializing in aircraft crash rescue. He received his honorable discharge in June of 1967. Upon returning home, he entered the workforce and had a 36+ year career with TRW/Reda Pump and Schlumberger. On March 8, 1967, he was set up on a blind date that would lead to a 53 + year union with Olive Faye (Ford), the love of his life. They were married on October 28, 1967, made their home in Dewey and raised their family there. OJ loved the game of softball. Any waking hour seemed to be spent at the ball field. The One Mile Sports Complex was his home away from home. Whether giving pitching lessons, batting tips, maybe a few life lessons, or tending to his perfectly manicured fields, you could always find him there humming along happily. Orville’s greatest love of all though was his love for his grandchildren. There was nothing greater in life than being their Pops. He was a man of few words, many stories, and leaves an outstanding legacy. Survivors include his wife, Olive, of the home; two children, Shelly Cary and husband Donnie of Copan, and Wesley Johnson and wife Carrie of Enid; four grandchildren, Kayla Donn Frye and husband Cordell, Rachel Paige Cary, Hayden Mitchell Johnson, and Erin Michelle Cary; two sisters, Joyce Reames of Oklahoma City, and Henretta Beal of Bartlesville; one brother, Fred Johnson of Dewey, and numerous nieces and nephews. He was preceded in death by his parents Henry and Victoria; siblings, Martha, Marvin and Lloyd Johnson, Louise Cummins, Lois Notley, Bobby Johnson, Billy Johnson, Joe Johnson, and Wanda Larmore. Visitation will be held Saturday July 18th and Sunday July 19th at Stumpff Funeral Home in Bartlesville, OK. Services will be held at the Stumpff Funeral Home Chapel, on Monday July 20th, 2020 at 11:00 am. Interment will follow at the Dewey, OK Cemetery.

The family of Orville Dean Johnson created this Life Tributes page to make it easy to share your memories.