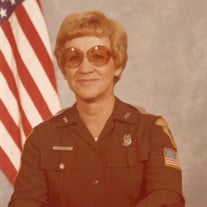 Norma Dell Sas passed away September 12, 2021, at her home in Bartlesville, Oklahoma at the age of 89. She was born to Lloyd Medearis and Martha Reese in Wann, Oklahoma on October 14, 1931. She earned her GED in Copan after attending Wann and... View Obituary & Service Information

The family of Norma Dell Sas created this Life Tributes page to make it easy to share your memories.

Send flowers to the Sas family.