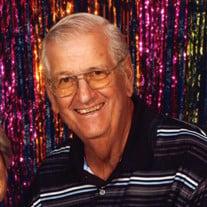 Noel “Butch” Elmer Roe passed away March 10, 2022, in Alamo, Texas, at the age of 71. He was born to Noel Clay Roe and Bertha Kinney Roe on August 16, 1950. He graduated from Bartlesville College High and was a truck driver for Phillips Petroleum and Chevron Phillips. On October 27, 1978, he married his sweetheart, Carol Dewitt. Butch enjoyed being outdoors hunting, fishing and playing golf, as well as spending time with his grandchildren and great-grandchildren. He had many accomplishments including serving in Vietnam in 1969 – 1970 in the 196th Light Infantry Brigade where he received a Purple Heart and a Presidential Unit Citation and retired from the Texas National Guard. He was also a member of the Borger Elks Lodge #1581 of Borger, Texas. He was preceded in death by his parents Noel Clay Roe and Bertha Roe, a son Kenny Dosh and his sister Janet Kay Strandgard. Butch is survived by his lovely wife Carol, his daughter Kristi and her husband Ralph Earles of Fritch, Texas, his 3 sons Butch and his wife Mindy of Fritch, Texas, Jeff and his wife April of Copan, Oklahoma, and Steve and his fiancé Jamie also of Fritch, Texas, as well along with 10 grandchildren, 12 great-grandchildren, his best buddy, companion and service dog “Rambo”, along with 1 brother Buster Beebe, and 2 sisters Helen Johnson and her husband Tom Wilkins, and Elizabeth “Fay” Tate.

The family of Noel "Butch" Roe created this Life Tributes page to make it easy to share your memories.

Send flowers to the Roe family.