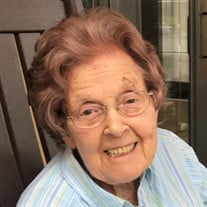 Nieta Faye (Ripley) Loftis was born in Frederick, Oklahoma on November 10, 1925 to Charles Hilary and Blanche May (Sell) Ripley. Raised on the farm in Tillman County, she attended Henderson Cons. #3, five miles south of Frederick. Living frugally was the norm during the depression years and Nieta eagerly helped with chores around the house and on the farm. After picking cotton for “the whole day”, she earned five cents based on the weight she had picked. She was surprised with the small payment but her eagerness to help and serve was not dampened. After graduating high school at Henderson, she attended Cameron University in Lawton and Oklahoma A&M in Stillwater, earning a bachelor’s degree in home economics. During WWII, she took off one semester to fill a teacher need at Weaver Cons. #13. There she met her future husband Jim Loftis when she was selling tickets for a basketball game. They were married in June 1947 at the Frederick Methodist church. The depression years and Christian family values grounded Nieta to love and praise God, to waste not, and to serve and help others. Jim commented many times that “no one could get more out of a mayonnaise jar than Nieta Faye”. Nieta taught home economics at Weaver School and Frederick Junior and Senior High schools. She taught Sunday school more than 10 years and was active in the church choir with her beautiful singing voice. She was an active member and president in United Methodist Women, Chapter CE of P.E.O., Beta Omicron Chapter of E.S.A., and Hospital Auxiliary. Nieta Faye volunteered over 33 years to the Frederick hospital, and many years to Oklahoma Blood Institute. She was voted Frederick’s most useful citizen in 1993 and was a Paul Harris Fellow with the Rotary Foundation. During Jim’s 1990 tenure as Rotary International District Governor for District 5770, Nieta traveled the state with him, attending club meetings, district and n national conferences. Nieta and Jim exemplified the Rotary motto “Service above Self” and the 1990 Rotary theme “Real Happiness is Helping Others”. The couple was honored in a Service Above Self banquet by the Frederick Rotary Club in 2010. And, they took up ballroom dancing with other Frederick couples after Jim retired from the U.S. Postal Service. In 2014 Nieta and Jim moved to Green Country Village in Bartlesville. They remained active with group morning exercises, bible studies, bingo and vesper services. They made many new friends and were strangers to no one. They also attended and were members of Bartlesville First United Methodist Church. Nieta passed peacefully on April 4, 2021 at the age of 95. She was preceded in death by Jim in 2017. Survivors include sons Neil of Bartlesville and Jim of Fort Collins, CO., grandchildren Spencer Loftis, Sarah Loftis and Sam Loftis, and two grandchildren, Kaelan and Keagan Loftis. Memorial services are pending.

The family of Nieta Faye Loftis created this Life Tributes page to make it easy to share your memories.

Nieta Faye (Ripley) Loftis was born in Frederick, Oklahoma on...

Send flowers to the Loftis family.