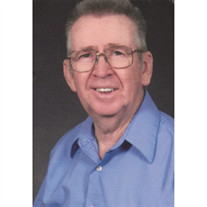 Funeral services for Nathan "Nate" Marvin Pollock, 79, of Spavinaw OK, were held Thursday, May 28, 2015 at 1:00 p.m. at the Christian-Gavlik Funeral Home Chapel in Broken Arrow, Oklahoma, with Joel Rutherford officiating. Interment in Floral Haven Cemetery in Broken Arrow, OK, was under the direction of Peters-Stumpff Funeral Home. Casket bearers for the service were Brady Mullins, Trent Rogers, Mike Teel, Craig Baker, Randy Goins and Erik Goins. Musical selections for the service were "Amazing Grace", "Beulah Land", "My Redeemer Lives" and "I Am On My Way To Canaan's Land". Military services were by the Haskell American Legion Post 56. Nathan passed away on May 23, 2015, at Hillcrest Hospital in Claremore, OK. He was born on October 22, 1935, in Tulsa, OK to John Haskell and Delores (Zibung) Pollock. Nate served his country as a proud member of the Marine Corp from 1956 to 1958 where he earned the rank of Coporal. He was a graduate of TJC with a degree in Horticulture. Nate married Patsy Baker and they have been to gather for 53 years. He retired from Rockwell International with a career in Aerospace. In the 1970's Nate and Pat had a successful business in Disney, OK. It was Nate's Disney Market with a full service meat market in the store, where he was dubbed "Butcher Boy". Nate was passionate about gardening and nature in general. He thoroughly enjoyed spending time with his family, especially outdoors, fishing, gardening or taking walks. Nate and Pat were avid bluegrassers and enjoyed traveling to bluegrass festivals. Nate is survived by his wife Pat of the home, son Nathan Dale "Guy" Pollock, a daughter Becky Mullins and husband Mark of Owasso; three grandsons: Cash Pollock of Foyil; Brady Mullins of Owasso; Wade Fisher of Vinita; a granddaughter Brandi Newman, great grandson Jacob Newman of Owasso; a brother Bill Pollock and wife Betty of Sperry; four sisters: Phyllis Bennett of Buffalo; Winnie Rogers and husband Bob of Chelsea; Mollie Teel of Sperry; Francis Johnson and husband Paul of Green Valley, MO; and beloved nieces and nephews. He was preceded in death by his parents, grandmother Granny (Dollie) Tate, a brother John Haskell Pollock Jr. and a sister Betty Pollock Hill.

The family of Nathan Marvin Pollock created this Life Tributes page to make it easy to share your memories.

Send flowers to the Pollock family.