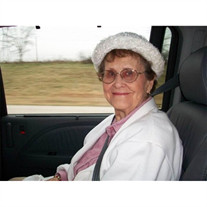 Myrtle Florence Gross Holley was born March 1, 1925 in Sulphur, Oklahoma to George William and Florence Myrtle (Ellis) Stone. She departed from this life on May 15, 2019 at the age of 94 years.  She was the oldest of four girls and spent her young years on a farm outside Sulphur.  She then moved to the Fittstown area where she graduated from McLish High School.   She enjoyed going back to school reunions   up until she was not able to do so anymore. She moved down to the Lawton area where she worked at Fort Sill army base.  There she met a handsome young soldier named Lee Gross and they were married in 1944.  They were married for 42 years and moved many times.  During that time they added four children to their home.  Rob, Jim, Linda and Julie.  Neither of them had happy homes growing up and were determined to make a good, loving home for their family.  They succeeded.  After Lee passed away in December of 1986, Myrtle met and married Orville Holley of Skiatook.  They were married for 24 years when he also passed away.   Since then she has been living in retirement in Owasso, OK, Myrtle was an accomplished seamstress making hundreds of garments for ladies around her home in Barnsdall and Skiatook. She also was terrific at knitting and crocheting, cake decorating, and baked wonderful cinnamon rolls and doughnuts among many other things.   After moving to Skiatook, she worked as a cook in the public school. Myrtle became a born-again believer when she was 23 years old and began a life of serving her Lord and telling people about Jesus. She loved people and loved teaching the bible to both young wives, moms and shut-ins, visiting them at home bringing them the Word.  She was generous with all she had to give.  She truly exemplified the Christian walk, her eyes fixed On Jesus and looking for his return. She is survived by her son, Rob Gross of Joplin, MO; her daughter Linda Kelley and husband Bob of Barnsdall, OK; her daughter Julie O'Connell and husband Don of Corinth, TX; grandchildren of whom she was most proud: Brock Hoskins and wife Crystal, Leslie Bowman and husband Chad, Kristen Walker and husband Brian, Bobby Kelley and wife Stephanie, Jennifer Ellison, Karen Overacker and husband Steve, Matt Gross and wife Jennifer, Stephen O'Connell and fiancée Promise, Tiffany Elder and husband Joseph. Her brother John G. Snyder of Magdalena, NM and her niece and best buddy Glenda Bishop of Sapulpa, OK. Also 24 great grandchildren and three great great grandchildren. She was preceded in death by three sisters Pearlie, Helen and Evelyn, her beloved son Jim Gross and granddaughter Dana Crabtree. Donations may be made in her name to Gideons International to purchase Scriptures.

Myrtle Florence Gross Holley was born March 1, 1925 in Sulphur, Oklahoma to George William and Florence Myrtle (Ellis) Stone. She departed from this life on May 15, 2019 at the age of 94 years.  She was the oldest of four girls and spent her... View Obituary & Service Information

The family of Myrtle Florence Holley created this Life Tributes page to make it easy to share your memories.

Send flowers to the Holley family.