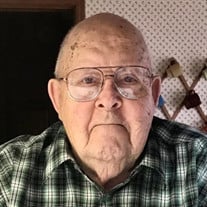 Milo Warren Witter of Bartlesville and Nowata died July 4, 2021, at the age of 92, at Forrest Manor Nursing Home in Dewey. Graveside services were set for Wednesday, July 7, at 2 p.m., at Memorial Park Cemetery in the family plot under the direction of Stumpff Funeral Home with Chaplain Randy Shaddox officiating. He died four days after the death of his wife, Mary Ann Witter. They had been together for almost 73 years, and although cause of death was natural, he never wanted to be apart from her. Milo was born on Dec. 16, 1928, at home in a rural area north of Dewey to Milo Eldred Witter and Bobbie Franklin Moody Witter. He was married to the love of his life, Mary Ann Schmoll, on July 19, 1948, in Bartlesville. He had loved her since the day they met. Milo and Mary Ann were the owners of Milo’s Fashion Footwear in downtown Bartlesville. Prior to that they had the leased shoe departments in Koppel’s, later known as Steve’s. He loved the shoe business. As a teenager he received a national recognition as a salesman and the company awarding it was said to have been amazed at his age. He worked for many years as manager at Frank Johnson Shoes in Bartlesville, even managing the Frank Johnson store in Blackwell. In the 1950s, he decided to go out on his own and leased the shoe department at Koppel’s. He and his wife retired in 1995. He was a 1948 graduate of College High School in Bartlesville, and served as president of the Trade & Industrial Club of Oklahoma his senior year. He also competed around the state as a boxer. In Bartlesville he was active in many organizations and served as president of the Washington County Cattlemen’s Association and the Cloverleaf Investment Club. He was a former member of the Tuxedo Lion’s Club. Around 1980, Milo and Mary Ann moved to their ranch located between Bartlesville and Nowata. He was a cattleman for many years, and also had four Triple A Leo Mare horses. His male horses were fast, and he put one to racing for one season, but decided he and the horses were happier being just “hay burners,” as he called them. Milo loved everything about being in the country, including being on one of his two tractors. He spent as much time as he could outdoors, and would put in a vegetable garden every year. He loved to fish and spent what time he could on any lake that was stocked with fish. Milo couldn’t sing, but that never stopped him. He whistled or hummed constantly. He attended Highland Park Baptist Church with his wife. Milo was a born artist and could draw anything. When he was in grade school, a teacher gave every student a bar of Ivory soap and had them carve whatever they wanted. Milo carved a horse, then got another bar of soap and carved a cowboy to sit on the horse. He enjoyed watching anything western, and would probably still have a black and white television had Bonanza not come on the air in color. He never had a pet as a child, but when his daughter brought home a cat from college, Sam became his cat. Since no one in the family knew anything about cats, Sam was walked twice a day around the neighborhood and Milo built him special cardboard houses with windows for his litterbox. He was as devoted to Sam as Sam was to him. He was preceded in death by his wife, Mary Ann; his parents; his step-father Roy Pearson; his sisters Marilyn Baldwin, Betty Lou Ewing Kelley and Genia Kathleen Anderson Eller; and his brother, Marvin Gowan. He leaves behind his daughter, Dorothy Ann Witter of Nowata, and several nieces and nephews. Remembrances may be made in his honor to ARF (Animal Rescue Foundation), P.O. Box 3292, Bartlesville, OK 74006; to Home of Hope, 226 W. Dwain Willis Ave., Vinita, OK 74301; or to the charity of your choice.

Milo Warren Witter of Bartlesville and Nowata died July 4, 2021, at the age of 92, at Forrest Manor Nursing Home in Dewey. Graveside services were set for Wednesday, July 7, at 2 p.m., at Memorial Park Cemetery in the family plot under the... View Obituary & Service Information

The family of Milo W. Witter created this Life Tributes page to make it easy to share your memories.

Send flowers to the Witter family.