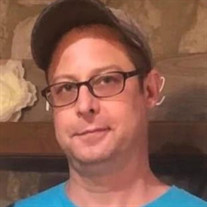 Michael (Mike) Anthony Marshall Jr, 47, of Bartlesville, OK passed away on September 9th, 2020. Mike was born on January 21st, 1973 in Mariemont, Ohio to parents Michael Anthony Marshall and Donna Marie DeRose. Mike grew up in Norman, Oklahoma and lived there until he met his wife in 1995. Mike and Amy were married in 1998 in Norman and then moved to Bartlesville after the birth of their son. Mike was working towards his degree at Wesleyan University, but his real passion involved fixing and creating things. Mike worked for the Delaware tribe of Indians for 6 years, preceded by Medicalodges of Dewey as a maintenance supervisor. He was certified in HVAC, an apprentice plumber an all-around handy man who could fix anything. Mike was an avid fan of classic cars, had a passion for history and food and loved to travel. Mike is survived by his wife Amy of 22 years, his children, Cheyann, Samuel and Benjamin, his grandchildren, Isabella and Hayden, his mother, Donna, father, Michael and brothers Doug and John. Mike will be fondly remembered by his mother-in-law, Joy, his sister-in-law, Mary, his brother-in-law, Mason. He is also survived by numerous nieces, nephews and cousins. Memorial services will be held at Stumpff Funeral Home on Monday, September 14th, 2020 with services beginning at 10:00 AM. Services will be followed with a gathering for the immediate family.

The family of Michael "Mike" Anthony Marshall Jr. created this Life Tributes page to make it easy to share your memories.

Send flowers to the Marshall family.