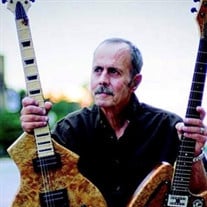 Michael Arthur Dodd entered his eternal home on October 16, 2020 in Bartlesville, OK surrounded by his family. He was 68. Michael is survived by his wife , Sharon of their home in Bartlesville; son Michael Dodd and wife Alisha, of Blaine, Washington; daughter Farrah Birch and husband Ryan of Bartlesville; daughter Maranda Swindell and husband Alan of Bartlesville; and 6 grandchildren Tyler, Tristyn, Mikala, Kaleb, Jude and Andrew; and brother Chris Dodd. Michael was born on January 25, 1952 in Reno, NV to parents, James and Beulah Dodd. He was later raised by his Uncle Roy and Aunt Emma Parsons who operated Parson's Grocery in Ponca City, OK after the passing of his mother. During Vietnam War Michael enlisted in the Army on February 27, 1970 earning his GED and trained as a Power Generator Specialist serving for 2 years and earning National Defense Service Medal; Vietnam Service Medal with 2 Bronze Service Stars; Republic of Vietnam Campaign Medal; and Marksman Award. Michael returned to Ponca City and became a skilled welder and continued to serve in the Army in the reserves. On June 24, 1978 Michael married Sharon Bryant of Ponca City. The Dodds moved to Maryland in 1983 and then purchased their home in Delmar, DE where they raised their children. Michael worked as a supervisor at Fire-Mak Sprinkler Systems as well as served as a First Mate on the company's charter fishing boat, Mak Attack. Michael and Sharon returned to Oklahoma in 2000 settling in Bartlesville. In 2007, after a battle with cancer and later diagnosis of multiple sclerosis, Michael retired to his home in Osage County where he immersed himself in his hobby of building electric guitars. His craft combined his love for music and building with his hands. Michael was a loving husband, father and grandfather, a patriot and Christian. He was a member of Word of Truth Fellowship and had accepted his salvation and the Lord as his savior. Michael's family take comfort in knowing they will see him again someday soon. Michael is preceded in death by his parents; sister Patricia Turner; brother James Dodd; and sister Delores Rylant. Services will be held at Word of Truth Fellowship 16097 NE Bison Rd. Bartlesville, OK 74006 on October 23, 2020 at 1:00 p.m. Services will be officiated by Pastor Jim Anderson with guest speaker Bruce Ganze with graveside service to follow at White Rose Cemetery, 804 W 11th St. Bartlesville, OK 74006. Viewing will be held by Stumpff Funeral Home 1600 SE Washington Blvd., Bartlesville, OK 74006 on Wednesday from 2:00-8:00 and Thursday 9:00-8:00.

Michael Arthur Dodd entered his eternal home on October 16, 2020 in Bartlesville, OK surrounded by his family. He was 68. Michael is survived by his wife , Sharon of their home in Bartlesville; son Michael Dodd and wife Alisha, of Blaine, Washington;... View Obituary & Service Information

The family of Michael Arthur Dodd created this Life Tributes page to make it easy to share your memories.

Send flowers to the Dodd family.