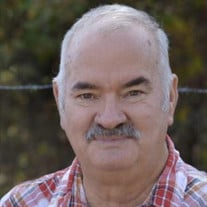 Michael Frank Cox, 68, passed on April 18, 2022. He was born to Louie Roberts and Bessie Roberts (Cox) in Kingsville, Texas, on December 14, 1953. Michael was later adopted after his biological father’s passing by Royce Cox. He married Denise Cox in 1977, and they lived together in Bartlesville, Oklahoma. Together they raised two children, Michael Cox (Claudette Harris) and Matthew Cox (Stephanie Cox). Three grandchildren also survive him, Noah Cox, Mason Cox, and Marley Cox, as well as his sister Carol Roberts, sister and brother-in-law Eileen and Paul Goldborer. Michael graduated from Barnsdall High School in 1973. Michael worked as a Security Guard at Conoco Phillips, Covenant Security Solutions, and Ascension St. John Jane Phillips for over 40 years. Michael was passionate about affecting the most positive change in people. He also volunteered at the Big Brothers Big Sisters of America, and March of Dimes, most notably among other charitable organizations. Michael is preceded in death by his mother, Bessie Cox, fathers Louie Roberts and Royce Cox, brother and sister-in-law Lewis and Jane Roberts, and sister Cathy Cox. We invite everyone to join us on May 15th, 2022, at 2:00 pm to celebrate the life of Michael Frank Cox. We ask that everyone dress comfortably for this outdoor event (rain or shine); attire should be as though you were going to a backyard cookout. Finger food and water will be provided. We’d like to hear your favorite stories of Michael. All of your kind words, thoughts, and prayers have been appreciated. We look forward to seeing everyone there! PLEASE BE AWARE YOU NEED TO BRING YOUR LAWN CHAIRS FOR THIS EVENT.

Michael Frank Cox, 68, passed on April 18, 2022. He was born to Louie Roberts and Bessie Roberts (Cox) in Kingsville, Texas, on December 14, 1953. Michael was later adopted after his biological father&#8217;s passing by Royce Cox. He married... View Obituary & Service Information

The family of Michael Frank Cox created this Life Tributes page to make it easy to share your memories.

Send flowers to the Cox family.