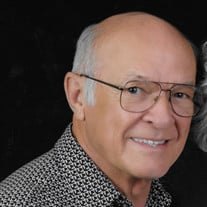 Mr. Mike Briggs, 84, of Bartlesville went to be with his Lord and Savior, Jesus Christ on Saturday, June 20th at The Journey Home in Bartlesville. Mike was born in Ochelata, Oklahoma on January 18, 1936, the third son to Lloyd and Amelia (Kidwell) Briggs. He grew up in Ochelata where he attended and graduated Salutatorian from Ochelata High School in 1954 and later attended Oklahoma State University. He saw the love of his life, Ann Smith getting off the school bus in Ochelata in the fall of 1952 and they married August 6, 1955. They made their home of nearly 65 years in the Bartlesville area. Mike was employed by Phillips Petroleum Company in 1956 and retired in 1992 after 36 years of service with a short time spent working in Grants, New Mexico for the company. He was a gifted athlete and played on the Ochelata basketball and baseball teams through his high school years. After graduating, he continued his love of sports participating in men’s flag football, slow-pitch softball and basketball until he began golfing. Golf was a passion and he achieved 3 holes in one at the Adams Golf Course in Bartlesville. He continued his passion of outdoor sports, bass fishing and later fly fishing. Mike was a humble servant of the Lord and his church and took great joy in serving others. Mike was a beloved and devoted husband, father, grandfather, great-grandfather, and uncle. He is affectionately known as “Gramps” by his grandchildren and great-grandchildren. Mike is survived by his wife Ann of Bartlesville, one brother, Joel “Tubby” Briggs of Ochelata, two daughters and their spouses, Brenda and Kenny King of Grand Lake, Michele and Craig Spence of Vinita, three grandsons, Curt and his wife Kaitlyn Spence, Michael Spence and Chris and his wife Kristi King, two great-grandchildren, Drake and Mayleona King and he was eagerly awaiting the birth of his third great-grandchild, Clark Alan Spence. He is also survived by many nieces and nephews and cousins. He was preceded in death by his parents, three brothers, two nephews and one great-nephew. Friends who wish may sign the guest book at the Stumpff Funeral Home from 9 AM until 5 PM on Wednesday and Thursday as the casket will remain closed at all times. Funeral services will be held at 10 AM on Friday, June 26, 2020 at the Dewey First Christian Church with Rev. Charles McCarthy officiating. Interment will be in the Ochelata Cemetery under the direction of the Stumpff Funeral Home & Crematory. In lieu of flowers, the family suggests that memorial donations be made to The Journey Home, 900 N.E. Washington Blvd., Bartlesville, Oklahoma 74006.

Mr. Mike Briggs, 84, of Bartlesville went to be with his Lord and Savior, Jesus Christ on Saturday, June 20th at The Journey Home in Bartlesville. Mike was born in Ochelata, Oklahoma on January 18, 1936, the third son to Lloyd and Amelia (Kidwell)... View Obituary & Service Information

The family of Michael M. Briggs created this Life Tributes page to make it easy to share your memories.

Mr. Mike Briggs, 84, of Bartlesville went to be with his Lord...

Send flowers to the Briggs family.