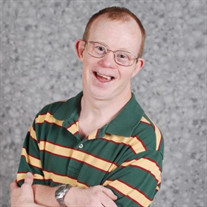 Michael David Anderson was born on January 20, 1967 to Paul & Ivery Anderson in Bartlesville, OK. He died peacefully in his sleep on August 17, 2020 at The Journey Home hospice care center in Bartlesville. In his 53 years of life he was a joy to everyone around him and had many accomplishments in spite of his Down Syndrome condition. He attended Bell Ringer School, Garfield Elementary School and Central Junior High in Special Education classes, then was integrated into regular classes at Bartlesville High School where he graduated in 1987. He was active in Special Olympics most of his life, participating in running, walking, swimming and bowling, and went to the International Special Olympics Summer Games at Notre Dame University in 1987 where he demonstrated his mastery of the butterfly stroke. He was also active in People First and made several presentations in Oklahoma City to members of the legislature and other government agencies. Mike was active in People First, serving as an officer and making speeches. He was also a member of Kiwanis and gave a presentation to the members about people with disabilities. He spoke at the Governor’s Conference on Developmental Disabilities. He was always ready to be helpful to anyone and everyone whenever he could. He moved into a group home operated by ARC Group Homes (now AbilityWorks of Oklahoma) when he was 18, and that was his home until shortly before his death. His best friends were his housemates and his staff. He loved his staff like his parents. He was a Boy Scout and reached Eagle rank. He loved to go to Camp Cherokee every summer. In his later years, he loved attending Camp Barnabas in Missouri every summer for 9 years. He had several jobs throughout his life, both with ARC Industries (now AbilityWorks of Oklahoma), primarily in the ARC Thrift Shop, and in the community. Mike also loved to sing and act. He originated the role of Assistant Dog Catcher in Children’s Music Theater’s production of Annie. He also had an important role in Emil Malik’s movie “To the Wonder,” with Ben Affleck. He was also a member of the ARC Singers, who gave concerts at least twice a year and sang at various functions in Bartlesville. Mike traveled extensively, both with his parents and with groups from ARC Group Homes. He has visited Spain, Portugal, Morocco, Mexico, Hawaii, Alaska, and several of the lower 48 states and Washington DC as well as several Caribbean islands on various cruises. He also traveled to Scotland and Ireland on his own on a group tour. He had always wanted to visit them because of his Irish and Scottish ancestry. Mike loved to read, watch TV, go to movies, dance and socialize. He was an avid Star Trek fan from the beginning and became a Star Wars fan later. He loved dogs, whether his own or someone else’s. He loved going out to eat and attending the Broadway musicals in Tulsa with his parents and his girlfriend, and always wanted the music from them on his iPod afterward. He is survived by his parents, his sister and brother-in-law Michele and Ron Sevart of Issaquah, WA, his aunt Esther Adams of Escalon, CA, his uncle and aunt Steve and Diane Anderson of Myrtle, MS, his nieces and nephew, and many cousins. In lieu of flowers, the family requests that donations be made to The Journey Home, 900 N.E. Washington Blvd., Bartlesville, OK 74006or AbilityWorks of Oklahoma, 501 S.W. Virginia, Bartlesville, Ok. 74003. Graveside services will be held at 11 A.M. on Thursday, August 20, 2020 at the Memorial Park Cemetery with Mr. Mark Weeter officiating. Services and interment are under the direction of the Stumpff Funeral Home & Crematory.

Michael David Anderson was born on January 20, 1967 to Paul & Ivery Anderson in Bartlesville, OK. He died peacefully in his sleep on August 17, 2020 at The Journey Home hospice care center in Bartlesville. In his 53 years of life he was a joy... View Obituary & Service Information

The family of Michael David Anderson created this Life Tributes page to make it easy to share your memories.

Send flowers to the Anderson family.