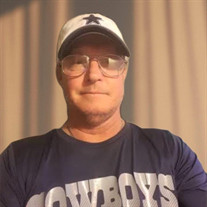 Merlin "Roy" Black Jr. age 61, passed away in Bartlesville, OK on December 11, 2021. Roy was born on September 2, 1960 to Merlin Roy Black Sr. and Mary Uziel Gougler in Coffeyville, KS. Roy worked as a Rock Crusher Operator for Greenhill Materials and was very proud of his position with the company. On December 29, 1995, Roy married the love of his life, Angela Birdwell Black. He was a huge fan of the Dallas Cowboys, recently became interested in kayaking and disc golf, he was a gun advocate who enjoyed shooting his guns, and he loved spending time with his family. He was an Army Veteran and was very proud of the medals and awards he earned while in the Army. He made some lifelong friends while serving and he enjoyed talking with them and the reunions they shared. Roy was preceded in death by his mother, Mary Houston; father, Merlin Roy Black Sr, sister, Stacy Evans, and all of his grandparents. He is survived by his wife, Angela Black, three sons: Casey Black and wife Lacey, Kristopher Black and wife Heather, Cameron Black and wife Amy, two daughters: Elizabeth Widener and husband Kevin, and Victoria Black, sisters: Leainda Stephen, and Kimberly Black, and his stepmom, Frances Black; 14 Grandchildren: Brennen Stevens, Maleeya Black, Kenzie Black, Austin Letzkus, Rylan Black, Hayden Herzer, Rogue Black, Kitana Black, Matthew Black, Andrew Widener, Bayleigh Black, Jaxson Black, and the two that he has raised since they were born, Trinity Black (aka the GB) and Cameron Black, Jr. (aka Dude), his dog peanut, and many relatives and friends. He was well known and loved by all who met him. Memorial Services are going to be held at Stumpff Funeral Home and Crematory’s Chapel on Thursday, December 16, 2021, at 3:00 PM with a graveside to follow on Friday, December 17, 2021, at 10:00 AM at the Sonora Cemetery in Henryetta, OK.

The family of Merlin "Roy" Black created this Life Tributes page to make it easy to share your memories.

Send flowers to the Black family.