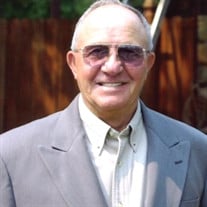 Melvin “Don” Mattix, born in Nowata, Oklahoma, on October 10, 1932, passed away at home on September 29, 2021, after a brief illness. Visitation will be held at the Nowata Stumpff Funeral Home on Monday, October 4, at 4 PM until 7 PM. Graveside services are Tuesday, October 5, at 10 AM at Nowata Memorial Park Cemetery. After graduating from Nowata High School in 1950, he married Mary Earlene Neel of Alluwe on September 27, 1952. After they were married and he was drafted into the United States Army in 1953 and served in 288 Signal Corp. stationed at Ft. Hood, Texas, and Fort Huachuca, Arizona, during the Korean War. Upon his discharge in 1955, he returned to Nowata. In 1963, he moved his family to Oglesby, Oklahoma, where he farmed as well as worked early in his career as a machinist and welder in Bartlesville. He and his brother Chuck owned Mattix Bros. Welding and Machine shop in Dewey, Oklahoma. Later they owned and operated an oil lease in Osage County. He then owned and operated a lease in Alluwe in Nowata County. After retirement he spent his days on the farm where he worked with his sons in pecan business. He leaves behind his wife of 69 years, Earlene, his son and daughter-in-law, Iaw Dan and Liz Mattix of Oglesby, Richard (Rusty) Mattix of Oglesby, daughter and son-in-law Janis and Dick Geiger of Bartlesville, and Randy Mattix of Oglesby and Denise Yeubanks of Coffeyville, Kansas. He also leaves behind many grandchildren and great-grandchildren. He was preceded in death by his parents Charles and Lessie Bingham Mattix, brothers Charles Mattix of Bartlesville, Jack Mattix of Bartlesville, C.L (Skeet) Mattix of Nowata, Jerry Mattix of Nowata, his sisters Helen Hicks of Nowata, and Pauline Morris of Wichita, Kansas. Honorary pallbearers are Keith Mattix, Matthew Mattix, Josh Yeubanks, and Kyle Yeubanks. Flag Presentation by Brad Mattix. In lieu of flowers, please make a donation in remembrance of Melvin “Don” Mattix to your favorite charity.

The family of Melvin Mattix created this Life Tributes page to make it easy to share your memories.

Send flowers to the Mattix family.