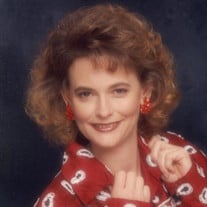 Melissa Ann (Reece) Beck Melissa “Missy” Ann Beck, 53, of Ochelata, OK passed from this life on December 19, 2020 at The Journey Home in Bartlesville, OK after a long, well fought battle with uterine cancer. Melissa was born on April 29, 1967 in Nowata, OK to Mary R. (Jackson) Reece and Ralph E. Reece. She received her education in the Nowata and Lenapah school systems, graduating with honors from Purcell High School in Purcell, OK. She was active in FHA, her church youth group, and attended Tri County Tech learning of Horticulture, which won her a ranking of 2nd in State at competition. Missy married Gary S. Williamson on June 30, 1985, and of that union two children were born – Aaron B. Williamson and April M. Williamson. She primarily worked with special needs children as a teacher’s aide in various school districts, which she thoroughly enjoyed. She later reconnected with a school mate from Lenapah school, Charles A. Beck, and they married on July 30, 2016. They shared many great moments in their short four years, one of which was buying and restoring a “hot rod” of Missy’s choice – a 1966 Buick Skylark. Together they got it running, and she was able to drive it! Of course, on one of the cruises she raced another, newer car and eventually blew the transmission – but she won! Missy was a thrill seeker, loved amusement park rides, fast cars, and loud music. She enjoyed many things such as working on the hot rod, fishing, hunting, crafting, sewing, crocheting, and keeping chickens, just to name a few. She is preceded in death by her daughter, April Mae Williamson; her father, Ralph Emery Reece; maternal grandparents, Wealthy Lucille and John Melvin Jackson; and paternal grandparents, Britomarte and Eldon Reece. She is survived by her beloved husband, Charles Beck of the home; sons, Aaron Williamson and wife, Mayra of Coffeyville, KS; Dylan Beck of Dewey, OK; and Brody Beck of Bartlesville, OK; her mother and father, Mary R. and Charles Fuller of Delaware, OK; her sister, Marcy Alexander and husband John of Nowata, OK; brother, Clark Fuller and wife, Cyndee of Nowata, OK; grandchildren, A.J. Williamson, Selena Williamson, Jaxson Williamson, and Sofia Williamson, all of Coffeyville, KS; niece, Charlie K. Alexander of Stillwater, OK; nephew, Jay H. Alexander of Nowata, OK; and many cousins, aunts, uncles, and friends. Melissa chose cremation, and that only a small, private family service be held (date pending). In lieu of flowers, please consider donating to the following: The Journey Home, 900 Washington Blvd, Bartlesville, OK 74006 The American Cancer Foundation, 250 Williams Street NW, Atlanta, GA 30303 The Cystic Fibrosis Foundation, 2642 E 21st St Ste 100, Tulsa, OK 74114

The family of Melissa Ann Beck created this Life Tributes page to make it easy to share your memories.

Send flowers to the Beck family.