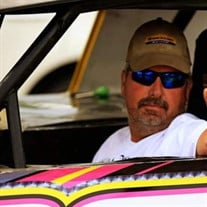 Matthew James Fugate was born on October 29th, 1966 to Carl (Butch) and Shirley (Randle) Fugate in Bartlesville, Oklahoma. He was raised in the Bartlesville/Ochelata area and graduated from Bartlesville High School. At the age of 12, he started his lifelong work for Robert and Theda Prather, who became parents to him. Matt enjoyed Nascar racing, watching wrestling, and going to rodeos to watch the kids. In his free time, he loved to race. It could be cars at the racetrack, a bull in the wrong pasture, or trying to get from one hayfield to another. He always was our neighborhood watch, keeping an eye out for people in places they should not be. He was the first one to be there when his phone rang for help. And always stopped as he was driving up and down the road for a quick visit with a neighbor. You only had to know or watch him as he took care of Robert and Theda until their death to know what kind of a man he was. Matt is survived by his significant other Jana, father Carl and Ruth Fugate of Copan, two brothers Paul and Tammy Fugate of Ochelata and Carl Fugate, and daughter Kylee Dye of Bartlesville and numerous nieces and nephews. Jana’s family Butch, Jo and Codi Taylor and Jason Taylor. Close friends Barry, Kim Jared, and Cody Jensen. JR, Miranda, Ronnie Prather and Duke, Kasi Prather and Karsyn, and too many friends and kids to mention. He is preceded in death by his adopted parents Robert and Theda Prather, mother Shirley Randle, and stepsister Lana O’Rourke. In lieu of flowers, the family request donations to the Caney Valley Aggies in the care of the American Bank of Oklahoma, PO Box 379, Ramona, Oklahoma, 74061.

Matthew James Fugate was born on October 29th, 1966 to Carl (Butch) and Shirley (Randle) Fugate in Bartlesville, Oklahoma. He was raised in the Bartlesville/Ochelata area and graduated from Bartlesville High School. At the age of 12, he started... View Obituary & Service Information

The family of Matthew James Fugate created this Life Tributes page to make it easy to share your memories.

Send flowers to the Fugate family.