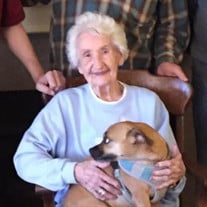 Mary Louise Bardwell, 94, of Bartlesville, died on Wednesday, October 28, 2020. She was born on September 9, 1926 in Bourbon County to parents Oliver (Pete) Rufus Jackson and Golda Imo (Reynolds) Jackson. On July 3, 1945, she married Virgil Glenn Bardwell. Mary worked as an administrative assistant for several years. Two years following her retirement, she went to work for Walmart for twenty-five years. She was a part owner of Klein Drugstore in Coffeyville, Kansas. She enjoyed creating artwork, reading, animals and volunteering at the Louisburg Public Library. She had resided in the Bartlesville area for the past four years. Mary is preceded in death by her parents, Oliver Jackson and Golda Jackson, her husband, Virgil Bardwell, and a grandson, Aaron Alan Bardwell. She is survived by her sons, Steve Bardwell and his wife Ruth of Bartlesville, Oklahoma, Richard Bardwell and his wife Carolyn Fox of Parrish, Florida, Bruce Bardwell of Hayes, Kansas, her granddaughter Vanessa Wallace and her husband Michael of Bartlesville, Oklahoma and one great-granddaughter, Alexa Wallace of Broken Arrow, Oklahoma, her sister Berniece Meihsner, nieces Barbara Doughty, Jean Pomereoy, both of Shreveport, Louisiana, and Susan Allen of Little Rock, Arkansas. A celebration of life will be held at a later date.

The family of Mary Louise Bardwell created this Life Tributes page to make it easy to share your memories.

Send flowers to the Bardwell family.