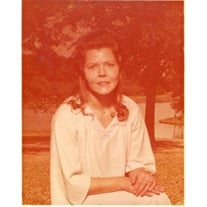 Funeral services for Loretta Jo Imel, 68, of Skiatook, OK, will be held Thursday, July 16, 2015 at 10:00 a.m. at Peters-Stumpff Funeral Home Chapel in Skiatook, with Pastor Zack Klassen officiating. Interment in Floral Haven Cemetery is under the direction of Peters-Stumpff Funeral Home. Casket bearers for the service are Gerald Imel, Johnny Lee McClain, Tony McClain, Donald Hudson, Gary Imel and Jim Imel. Honorary casket bearer is Tim Simmons. Musical selections for the service are "How Great Thou Art", "Amazing Grace" and "Peace In The Valley". Loretta passed away on July 12, 2015, in Skiatook, Oklahoma. She was born on January 29, 1947, in Tulsa, Oklahoma to Harold and Marie (Grigg) Hicks. Loretta married Jimmie Imel on January 11, 1965 in Tulsa, Oklahoma they had made their home in Skiatook since 1969. She was a member of the RLDS Church in Skiatook. Loretta is survived by her husband Jimmie of the home, a son Danny Imel of Skiatook, a daughter Tammy Imel of Tulsa, two brothers: Ronnie Hicks and Donnie Hicks, two grandsons, two great granddaughters, and one great grandson. She was preceded in death by her parents, and a son John Imel. www.peters-stumpff.com

The family of Loretta Joe Imel created this Life Tributes page to make it easy to share your memories.

Funeral services for Loretta Jo Imel, 68, of Skiatook, OK, will...

Send flowers to the Imel family.