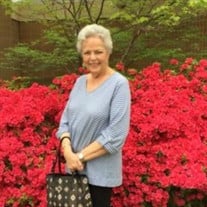 Linda D. Carpenter, an accomplished Dallas area commercial designer and successful businesswoman, died May 26 in Santa Barbara, Ca. Mrs. Carpenter, 78, succumbed to a sudden illness while staying at her vacation home in California. Mrs. Carpenter was born Linda Dee Roughton on June 14, 1943, in Lake Charles, La. Her father, Bert G. Roughton, was stationed at the Army base there along with her mother, Betty Roughton. To her family she was known as Dee Dee. Her brother Brian, two years her junior, was her primary playmate and partner in crime as the family moved frequently after World War II. The Roughtons moved to California, New Mexico and Dallas before settling in Fort Worth, where Mrs. Carpenter lived until adulthood. She spent her teen years in the 1950s, and loved to socialize, dance and watch Elvis Presley movies. She was in Paschal High School’s graduating class of 1961 and attended Texas Christian University. Over the years, the young Linda Roughton developed a close relationship with her aunt and mentor Nell Ruth Isaacs, a prominent aviator, businesswoman and rancher in Las Cruces, N.M. Mrs. Carpenter often spoke fondly of her visits to her aunt’s ranch. Mrs. Carpenter became an accomplished businesswoman in her own right, developing a successful and well-known commercial design business in Dallas through the 1970 and early 1980s. In 1983, she met Roger L. Carpenter of Coffeyville, Ks., and they were soon married. Coffeyville was her mother’s hometown. Together they expanded and developed Sonic Drive-In franchises throughout the Midwest. The couple also invested in other ventures as well as commercial real estate in a variety of locations. In 2002, they moved into the dreamhouse they designed together and built in Bartlesville, OK. The Carpenters were active in the community and made philanthropic gifts to several local organizations. Mrs. Carpenter was known as a tough, capable and astute businesswoman who found success at a time when business was still dominated by men. In business, she had little patience for nonsense, laziness or dishonesty. To her friends and family, Mrs. Carpenter was warm, generous and devoted to sustaining her far-flung family. The couple lived in Bartlesviille until they moved to Tulsa in 2015, when Mr. Carpenter fell ill and required additional medical services. He died in 2018 after a prolonged illness. Shortly thereafter, Mrs. Carpenter moved to Dallas and continued managing the family investments. She bought her first residence in Santa Barbara in 2018 and continued to vacation there until her death. The Carpenters loved travel and favored cruises. Mrs. Carpenter never lost her love of cruises and used these voyages to gather her family together until the Covid 19 pandemic interrupted their vacations in 2020. In recent years, she was regarded fondly as the family matriarch. Ms. Carpenter is survived by sons, Jeff Slupski, Tulsa; Brad Slupski, Shawnee, Ks.; Brent Carpenter, Lawrence, Ks.; and Neal Carpenter, Plano, Tx.; as well as brothers Brian Roughton and Andy Roughton, Dallas; and Bert Roughton Jr., St. Simons Island, Ga. She is also survived by five grandchildren, two great grandchildren and many nephews and nieces. A family memorial services will be held at 11:30 a.m., June 13, 2022 at the Heights Baptist Church, 201 West Renner Road, Richardson, Tx. Mrs. Carpenter will be laid to rest alongside her late husband, Roger at a graveside service at 2:00 p.m. on June 14, 2022, at Memorial Park Cemetery, 4200 Nowata Rd., Bartlesville, OK, under the direction of Stumpff Funeral Home, Bartlesville, OK.

The family of Linda Dee Carpenter created this Life Tributes page to make it easy to share your memories.

Send flowers to the Carpenter family.