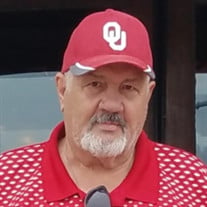 Lester Laverne (Vern) Fink, Jr., age 76, of Nowata, OK passed away on September 9, 2021 at Jack C. Montgomery VA Medical Center in Muskogee, OK. Vern was born to Lester Laverne Fink, Sr. and Barbara June Fink on January 31, 1945. After graduating from Nowata High School in 1963, Vern married his high school sweetheart, Anna Marie Hodges, and while serving in the Navy, became the proud father of Christina Kaye and Kevin Dwain. All who knew Vern knew that he was an avid Oklahoma Sooners fan. He followed all OU sports and loved going to watch games, especially during football season, with both Kevin and his fellow fan and sidekick, Dusty Mattix. Many other friends and family were able to enjoy the experience of a live OU game at his invitation. Another favorite pastime was playing BINGO at the casinos with Christina, often using his grandkid’s birthdates as his lucky numbers. In his earlier years, Vern enjoyed hunting, fishing, and running the Sportsman’s Hut. Vern was preceded in death by his parents, an infant brother, and brothers Larry Wayne and Robert Dwain. He is survived by his daughter, Christina Ames and husband Mike; grandchildren Zachariah, Hunter, and Kaitlyn; his son, Kevin Fink and wife Wendy; grandchildren Kody and fiancé Elizabeth, Kasey and wife Hope, Korey and fiancé Joy, and Kaden Drew. He is also survived by his wife Dallis, stepson Russell Cunningham, and his ‘princess and partner in crime,’ Adley Anne. In addition to these, he leaves behind cousins, nieces, nephews, and many friends. Join us for a Celebration of Vern’s life on Friday, September 24th at 10am at Winganon Cemetery in Chelsea, OK. Please come dressed in your favorite OU gear! If you would like to follow the family to the cemetery, we will be meeting at Stumpff Funeral home in Nowata, OK at 9:30am.

The family of Lester Laverne Fink Jr. created this Life Tributes page to make it easy to share your memories.

Send flowers to the Fink family.