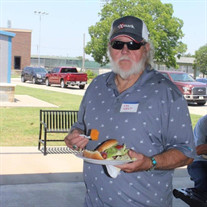 Denzil “Lee” West passed away on Sunday, September 19, 2021, in Bartlesville, Oklahoma, at the age of 80. He was born to Floyd Clifford West and Dorothy Geneva West in Lenapah, Oklahoma, on July 2, 1941. Lee earned his education at Wichita Public School, Central Elementary and East High. In 1959, he joined the United States Army. In his working years, Lee was a supervisor at Reda Pump for 25 years, he also worked for Bonham Trucking as an over road trucker. On November 16, 1962, Lee West married the love of his life, Marilyn Kay Hanshaw West. Lee had many hobbies he loved doing in his free time including fishing, hunting, blacksmithing, making guitars, trips to Colorado, spending time at Beaver Lake, photography, moonshining, riding his lawnmower, and taking Tuffy to the lake and letting him run, but he loved spending time with his family and friends more than anything else. He is preceded in death by his parents Floyd and Dorothy West, brother Mendal Gene West, daughter Danielle West, and two of his great grandbabies. Lee is survived by his wife Marilyn Kay West of Copan, Toni Kyler and Joe Kyler, three brothers: Jim West, Larry West and wife Ilene of Bartlesville, and John West and wife Ruth of Cartridge, Missouri, his sister Cheryl West Tallman and husband Les of Bartlesville, seven grandchildren from Copan, Bartlesville, and Bowring areas, 9 great grandchildren from Copan, Bartlesville, and Bowring areas and a host of nieces, nephews and friends. In Lieu of flowers, please make donations in remembrance of Denzil “Lee” West to the Matoaka Baptists Church at 24660 3940 Rd, Ochelata, OK 74051. Visitation will be held Thursday, September 23, 2021, from 9 am to 8 pm with the family receiving guest from 6 pm to 8 pm. A funeral service will be held Friday, September 24, 2021, at 2 pm at Mount Washington Cemetery in Lenapah, Oklahoma.

The family of Lee West created this Life Tributes page to make it easy to share your memories.

Send flowers to the West family.