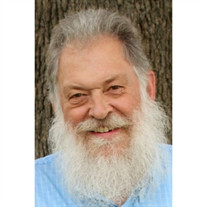 Memorial Services for Lawrence "Larry" D. Johnston, 60, of Skiatook will be held Sunday, September 29, 2013 at 2:00 p.m. at the Johnston family residence in Skiatook, Oklahoma with Glenn Cooley officiating. Lawrence passed away September 19, 2013 at his residence. He was born on August 6, 1953 in Nichols, Iowa, to Everett Samuel and Lillian Ann (Wasson) Johnston. Lawrence married Renaye Nelson on July 23, 1972 in Milltown, Wisconsin. In 1985 the family moved to Oklahoma. They spent 12 years in Bixby, and then moved to Skiatook in 1999. Lawrence was a member of the Restoration Church in Skiatook. Lawrence loved his family very much, was called "Pucky" by his grandkids, enjoyed hunting, fishing and being outdoors. He loved to share his homemade meat and sausage with his family and friends. While they lived in Bixby, Lawrence volunteered as a coach for the football and baseball teams. He and his wife Renaye owned Stems flower shop in Tulsa and Skiatook for 25 years. He also enjoyed learning about the Civil War its history and making sure his children learned about it as well. Lawrence is survived by his wife Renaye of the home in Skiatook, 3 sons, Jeremiah and his wife RoseAnn, Joshua and his wife Lesley and Jacob and his wife Julie. 8 grandchildren, Jasper, Gabriel, Abigail, Forrest, Marvin, Everett, George and Genevieve. He is also survived by two sisters: Helen Kline and Judy Voith and numerous nieces, nephews, cousins and many friends. He was preceded in death by his parents and 2 brothers, Keith and Forrest. At a later date Lawrence will have an urn burial at the Columbus City Cemetery in Iowa, and be buried next to his brother in the Johnston burial plot purchased by his great grandfather. Cremation services were under the direction of Peters-Stumpff Funeral Home. www.Peters-Stumpff.com

The family of Lawrence D. Johnston created this Life Tributes page to make it easy to share your memories.

Send flowers to the Johnston family.