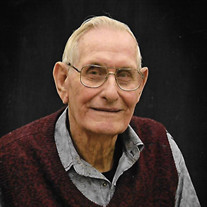 Lawrence C. Cramer, 92, of Bartlesville, died at 3:30 A.M. on Saturday, July 11, 2020 at his home in Bartlesville. In keeping with Mr. Cramer’s wishes that no one would become ill from attending a public gathering during our nation’s Covid 19 situation, there will be no public gathering or service. A private interment will be in the White Rose Cemetery directed by the Stumpff Funeral Home & Crematory. Come and go visitation for family and friends will be at the Stumpff Funeral Home from Monday July 13, thru Friday July 17, 2020 from 9 AM until 5 PM daily. Mr. Cramer was born at Prue, Oklahoma on April 24, 1928 the son of George E. and Mary May (Glenn) Cramer. He grew up and received his education in the Hominy, Prue and Bartlesville areas. He was married to Leatha G. Cook on March 25, 1946 at Independence, Kansas. Mr. Cramer entered the U.S. Army on April 25, 1946 and served until receiving his Honorable Discharge on October 4, 1947. Following his discharge, he returned to Bartlesville where he became active with his brother in the Cramer Concrete business and later continued that association with his nephew until his retirement from the concrete business. He and Mrs. Cramer had also been active as school bus drivers for the Bartlesville Schools for 17 years. He was a longtime member of First Assembly of God (now Spirit Church) in Bartlesville and his current membership is at Tuxedo Assembly of God Church. For a number of years, Mr. and Mrs. Cramer volunteered their time in assisting with construction projects for the Boy’s Town at Cache, Oklahoma. He had also been an active volunteer with the Agape Mission. Mr. Cramer is survived by two daughters, Cynthia Trammel and husband Brud of Owasso and Mary Lorene May and husband Dale of Bartlesville, three sons, Bud C. Cramer and wife Rita of Lone Grove, Oklahoma, Daniel L. Cramer and wife Kate of Bartlesville and Steven Eugene Cook and wife Sharon of Phoenix, Arizona, one brother, Jack Cramer and his wife Delores of Bartlesville, his special friend, Kay Landis of Bartlesville and numerous grandchildren, great grandchildren and nieces and nephews. He was preceded in death by his wife, Leatha Cramer on April 14, 2009, his parents, one sister and two brothers. The family would like to express their “Thank” to Angel Care Home Health and Rivercross Hospice for their excellent and compassionate care during Mr. Cramer’s declining health. In lieu of flowers, the family requests that memorial donations in his name be made to the Agape Mission, 555 S.W. Cass, Bartlesville, Oklahoma 74003.

Lawrence C. Cramer, 92, of Bartlesville, died at 3:30 A.M. on Saturday, July 11, 2020 at his home in Bartlesville. In keeping with Mr. Cramer&#8217;s wishes that no one would become ill from attending a public gathering during our nation&#8217;s... View Obituary & Service Information

The family of Lawrence C Cramer created this Life Tributes page to make it easy to share your memories.

Send flowers to the Cramer family.