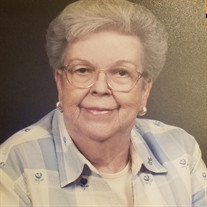 Mrs. Lavina Belle Berner, 96, of Norman, and formerly of Bartlesville, died on Friday, September 11, 2020 at Norman, Oklahoma of natural causes. Graveside funeral services for Mrs. Berner will be held at 11 A.M. on Saturday, September 19, 2020 at the Memorial Park Cemetery under the direction of the Stumpff Funeral Home & Crematory. Friends who wish may sign the memorial book at the Stumpff Funeral Home from 9 AM until 5 PM Wednesday, Thursday and Friday as the casket will remain closed at all times. Mrs. Berner was born at Wheaton, Kansas on December 16, 1923 the daughter of Dewey Robert Goodman and Florence Bell (Founds) Goodman. She graduated from Wheaton High School in 1941 as the Valedictorian of her class . She continued her education at Kansas State University where she graduated with her Music Education Degree in 1947. She was married to Robert Milton Berner on June 16, 1944 at Manhattan, Kansas. After college they moved to Bartlesville, Oklahoma in 1948 where she was a long time resident. During World War II, she had taught school in a one room schoolhouse in Kansas and in Bartlesville was employed at Bartlesville Wesleyan College in the General Office and Secretary to the Dean of Education. She had been active in Sewing Club, Quilt Club, Troop Leader in Girl Scouts, Den Leader in Cub Scouts, 50 years in Order of Eastern Star # 142, Mother Advisor for Bartlesville Rainbow Assembly # 23 and Bridge Club. She was a longtime member of the First Wesleyan Church. She enjoyed playing the organ and piano and taught her grandchildren how to play the piano. Mrs. Berner is survived by two sons, Steve Berner and his wife Vickie of Bartlesville, Charles Berner and his wife, Linda of Kingwood, Texas, and daughter, Paula Anne McUsic and the late Don McUsic of Newcastle, Oklahoma, nine grandchildren and 9 great grandchildren. She was preceded in death by her husband, Robert Milton Berner on February 9, 1973, her father, Dewey Goodman on February 3, 1990. Her mother Florence Goodman on October 10, 2002, a sister, Phyllis Corey on August 10, 2001 and her son-in-law, Don McUsic on September 25, 2013. In lieu of flowers the family suggests memorial donations to be made to the Johnson Cancer Research, cancer.k-state.edu/support or to the charity of the donor’s choice.

The family of Lavina Belle Berner created this Life Tributes page to make it easy to share your memories.

Mrs. Lavina Belle Berner, 96, of Norman, and formerly of Bartlesville,...

Send flowers to the Berner family.