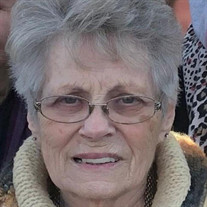 Laveeta Bernice Topping, 86, of rural Oglesby area, died at 11:20 P.M. on Monday, February 22, 2021 at her home. Funeral services for Mrs. Topping will be held at 10:00 A.M. on Saturday, February 27, 2021 at the Nowata First Baptist Church with Pastor Wayne Clayton officiating. Interment will be in the Oglesby Cemetery directed by the Stumpff Funeral Home & Crematory. Visitation will be at the Stumpf-Nowata Funeral home at 620 E. Cherokee in Nowata on Friday from 12 Noon until 8 PM. And the family will receive guests at the Stumpff-Nowata Funeral Home from 6 PM until 8 PM Friday. Mrs. Topping was born on December 1, 1934 at Illinois Bend, Texas to Virgil Eugene Martin and Vera Eloise (Leflett) Martin. She grew up and received her education at Alvin, Texas and graduated high school. there. She was married to John Dee Topping at Tucson, Arizona on June 19, 1952. Following Mr. Topping’s discharge from the US Air Force they made their home in Houston, Texas area until moving to Oglesby, Oklahoma in 1960. They purchased the Oglesby Store and Mrs. Topping operated it as Topping Grocery and was also active as a homemaker. In 1975 she was employed at a dental technician for Dr. John Gruenberg in Nowata until her retirement. She was a longtime member of the Nowata First Baptist Church where she had been active as a Sunday School teacher for many years until 3 years ago. Mrs. Topping is survived by four children, John D. Topping Jr. and wife Marcella of Morehead City, North Carolina, Cynthia L. Fuller and husband Clark of Nowata, Brenda Kay Sitton of Hillman, Michigan and David R. Topping and wife Kristen of Nowata, four sisters, Gwen Golden of Groveton, Texas, Vera Watson of Stephensville, Texas, Pat Puryear of Sweeney, Texas and Helen Furnace also of Texas, 14 grandchildren, 25 great grandchildren and 8 great great grandchildren. She was preceded in death by her parents, a brother, Paul Martin, and son Ronald Gene Topping in 2016 and her husband, John Dee Topping on November 27, 2009.

The family of Laveeta Bernice Topping created this Life Tributes page to make it easy to share your memories.

Send flowers to the Topping family.