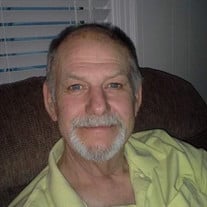 Larry Riley, 68, passed away peacefully on Friday October 9, 2020 from complications of a life lived on his own terms that led to treasured friendships, unexpected adventures, and a somewhat bothersome battle with liver and kidney disease. Nevertheless, he lived to the best of his ability making no concessions to diabetes or archaic Oklahoma marijuana restrictions. Live and let live was his motto. He also really enjoyed “Ungawa!” Let’s also not forget, “Want me to give you something to cry about?” Born in Cushing, Oklahoma in 1952 to parents Nelma (Hillyard) and Robert Riley, he was initially a sweet baby. However, once he became a grown man he… well, he was still basically just a really nice guy despite growing up in 1960’s Bartlesville with several rambunctious siblings and friends. Larry graduated from Bartlesville College High in 1970 and went on to become an expert machinist, creating space shuttle parts for Rockwell International in Downey, California. He was well known for building THE Biodome and being the smartest man alive, as purported by his youngest daughter throughout her career at Jane Philips elementary. After dazzling the aerospace industry and getting up to his fair share of debauchery, Larry returned to Bartlesville in 1992 and began working for Superior Welding, which he remembered as a cool place to work but in desperate need of new flooring. Following his love of cars and giant engines, he moved on to become a long-haul trucker for J.B.Hunt. During his driving career, he visited 46 states, Mexico, Canada, and loved to send postcards home to his two daughters. Larry’s hobbies included working on cars; playing board games; pining over Harley Davidsons; having the newest sound tech even if it meant you couldn’t move through the house while a CD was playing; and collecting and watching movies. Perhaps his most famous hobby was affectionately known as his “Bubba-Q” grilling, which his family loved to share with him. Larry also enjoyed NASCAR and of course OU football because there are no other football teams that matter in Oklahoma. He was known as a soft-hearted and generous soul, with an ornery streak. In his last years, Larry lived in the North County Assisted Living Center in Collinsville where he was well loved by his caretakers despite his constant pranks and was quick to make friends, tell jokes, and brag on his two daughters. Larry was preceded in death by his father Bob Riley, step-father and best friend, Vernon Long, mother Nelma Long, and brother Mark Riley. Larry is survived by daughters Christina Riley and Natasha Riley-Griffin, grandsons Dominic Yeatman, Cameron Yeatman, and Jacob Brandenburg, ex-wife Alisa Torres, brothers Tony Rickman, Jim Riley, Bruce Rickman, Joe Riley, Floyd Long, and David Long, sister Mary Lou Anderson, and several nieces and nephews. The family is planning a future reunion in Bartlesville to celebrate Mr. Riley’s well-lived life, to which he wanted his ashes to arrive fashionably late… minimum 2 hours.

Larry Riley, 68, passed away peacefully on Friday October 9, 2020 from complications of a life lived on his own terms that led to treasured friendships, unexpected adventures, and a somewhat bothersome battle with liver and kidney disease. Nevertheless,... View Obituary & Service Information

The family of Larry Allen Riley created this Life Tributes page to make it easy to share your memories.

Send flowers to the Riley family.