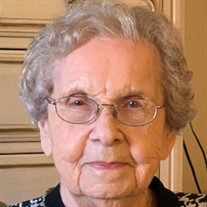 Mrs. Lenorah Alberta Cottom, 103, formerly of Bartlesville, Oklahoma died at 7:48 p.m. on Wednesday at the Evergreen Baptist Village in Owasso, Oklahoma. She was surrounded by her loving family. A graveside service will be held at 2 p.m. on Tuesday, December 22, 2020 at the Fairview Cemetery in Cherryvale, Kansas with Pastor Chris Wall of the First Baptist Church in Owasso officiating. Viewing times will be from 9:00 a.m. to 5:00 p.m. Saturday, December 19 and Sunday, December 20, and from 9:00 a.m. to 8:00 p.m. Monday, December 21. Funeral arrangements are under the direction of the Stumpff Funeral Home & Crematory in Bartlesville. Mrs. Cottom was known by friends and family as Alberta. She was born in New Truxton, Missouri on January 6, 1917 the daughter of Floyd E. and Ada R. (Aspley) Pennington. She grew up on a farm between Cherryvale and Altamont, Kansas and graduated from Altamont High School. Alberta was married to Charles Richard Cottom on December 24, 1935 in Independence, Kansas. They moved to Mound Valley, Kansas and later resided in Cherryvale, Kansas where she was employed at the Lee Jean factory. In 1955, the family moved to Bartlesville, Oklahoma where they lived until October 2004. While in Bartlesville, she was employed by TG&Y and later by Vandivort’s Apparel until her retirement in 1979. After her husband’s death, Alberta resided at the Baptist Village in Owasso to be closer to family. She was a member of the First Baptist Church of Owasso and volunteered her time at their mission store. Alberta was a loving, sweet, and kind person who was devoted to her family. Alberta is survived by one daughter, Adah Joyce McCaskill and her husband Ron of Charlotte, North Carolina, a son, James David Cottom and his wife Linda of Owasso, seven grandchildren, Julie Cottom, Gina Cottom, Dominique Frearson, Tracy Singer, Darren Cottom, Stacy Caviness, Kevin Cottom, thirteen great grandchildren, and one great-great grandchild. Mrs. Cottom was preceded in death by her husband, Charles Richard Cottom on November 29, 1999, a son Charles Keith Cottom on March 3, 2016 and a grandson, Lance David Cottom on August 2, 2013.

Mrs. Lenorah Alberta Cottom, 103, formerly of Bartlesville, Oklahoma died at 7:48 p.m. on Wednesday at the Evergreen Baptist Village in Owasso, Oklahoma. She was surrounded by her loving family. A graveside service will be held at 2 p.m. on... View Obituary & Service Information

The family of L Alberta Cottom created this Life Tributes page to make it easy to share your memories.

Send flowers to the Cottom family.