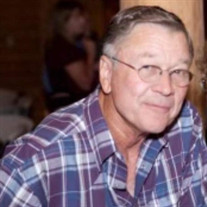 Kenneth “Kenny” Henry Stritzke, was born February 4, 1942, in Chelsea, Oklahoma, to Edd John and Elsie Leon (Jenkins) Stritzke. He left his own earthly home to reside in his heavenly home on Sunday morning, October 24, 2021, at the age of 79 years. Kenny was raised and educated in Delaware, Oklahoma and graduated with the Delaware High School Class of 1960. After high school, Kenny served in the Army National Guard. Kenny met his future wife, Connie (Bradshaw), while cruising in Nowata, Oklahoma. They enjoyed roller skating and later riding on his Harley Sportster motorcycle. They were married on September 14, 1963, in Chelsea and made their first home in South Coffeyville, Oklahoma. After their first born was a year old, they made their home along Star Route in rural Lenapah, Oklahoma. To this union were born a son and daughter, Garrett and Gayla. Kenny spent several years as a machinist at Funks Manufacturing in Coffeyville, Kansas. He worked at Hickory Coal as a heavy equipment operator and drove a semi for both CFI Trucking and Steel and Pipe Supply. He was gifted mechanically and could fix just about anything when he set his mind to it, a gift freely shared. Kenny most enjoyed spending time with his family and friends and attending church at First Baptist Church of Nowata. He loved being outdoors checking his cows, gardening, riding his 4-wheeler with his dog Daisy, cutting firewood, and visiting with the neighbors. Having survived cancer himself, he made it his mission to call and check on those who were ill. He was known for his big smile, ornery sense of humor and ready handshakes and hugs. Loving family members include: His wife of 58 years: Connie, of the home. Son Garrett and wife Jody of Liberty, Kansas. Daughter Gayla Thomas and husband Jack of Lenapah, Oklahoma. And the grandchildren who were his absolute pride and joy: Gatlun Thomas, Wyatt Stritzke, Ashtyn Thomas, and Keegan Stritzke. One brother; Jerry (Jeannie) Stritzke. Three sisters; Kathy Robertson, Linda Sullivan (Lyndon McLennan), and Darliene (Carl) Ozbirn. He was preceded in death by his parents, Edd and Elsie Stritzke and in-laws, Al and Audrey Bradshaw. Services have been entrusted to Stumpff-Nowata Chapel at 620 E Cherokee Avenue, Nowata, OK 74048. Visitation will be held Thursday, October 28, 9:00am to 8:00pm. The family will receive friends from 5:00pm – 7:00pm. Funeral Service will be held Friday, October 29, 2:00pm at First Baptist Church Nowata, 433 N Mississippi Street, Nowata, OK 74048. Pastor Wayne Clayton will be officiating. A committal service and interment will follow at Mt Washington Cemetery, Lenapah, Oklahoma.

Kenneth &#8220;Kenny&#8221; Henry Stritzke, was born February 4, 1942, in Chelsea, Oklahoma, to Edd John and Elsie Leon (Jenkins) Stritzke. He left his own earthly home to reside in his heavenly home on Sunday morning, October 24, 2021, at the... View Obituary & Service Information

The family of Kenneth Henry Stritzke created this Life Tributes page to make it easy to share your memories.

Send flowers to the Stritzke family.