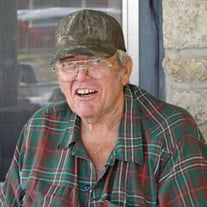 Kenneth (Kenny) Ray Pugh, passed away Sunday, September 27, 2020, at the Journey Home. He was born on July 20, 1945, near Oglesby, Oklahoma to William Henry and Mary (Johnson) Pugh. He attended Oglesby schools through 8th grade and graduated in 1964 from Caney Valley High School in Ramona. He married Sharon (Evans) Pugh on August 19, 1977, in Dewey, Oklahoma and became a second father to her 4 children. They made their home in Oglesby. Kenneth worked most of his life delivering, pouring and finishing concrete. In his younger years he drove his Barracuda in competitive drag races. He enjoyed working on his farm, gardening, and hunting. He was an avid horseman and enjoyed riding, breaking and breeding quarter horses but was also known to hop on a Shetland pony named Snowball to tire him out so he would ride nicely for the kids. He will best be remembered as an animated storyteller with an infectious laugh. However, his most favorite pastime was spending time with his grandchildren. He is proceeded in death by his parents, William and Mary Pugh; and siblings, Richard Pugh, Tuck Pugh and Lucille Stevens. He is survived by his wife, Sharon Pugh, of the home; daughters, Pamela (and Warren) Peck of Copan, OK., Shari (and Randy) Anderson of Oglesby, OK and Jennifer (and Jeff) Fenstermaker of Bartlesville, OK; one son, Kevin (and Jeanne) Rodgers of Madill, OK; one brother, HC Pugh of Oglesby, OK; 16 grandchildren and many great-grandchildren, nieces and nephews. A graveside memorial service will be held Saturday, October 3, 2020, at 10am at the Oglesby Cemetery. Services have been entrusted to Stumpff Funeral Home and Crematory.

Kenneth (Kenny) Ray Pugh, passed away Sunday, September 27, 2020, at the Journey Home. He was born on July 20, 1945, near Oglesby, Oklahoma to William Henry and Mary (Johnson) Pugh. He attended Oglesby schools through 8th grade and graduated... View Obituary & Service Information

The family of Kenneth Ray Pugh created this Life Tributes page to make it easy to share your memories.

Send flowers to the Pugh family.