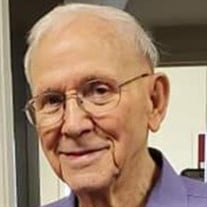 Obituary for Kenneth Ray Morgan Kenneth Ray Morgan, 87, formerly of Wann, OK passed away on January 22, 2021, after a short illness. There are no services planned at this time due to the pandemic. The family will have a private service at a later date. Internment for both Kenny and Emma will be at the Ball Cemetery in Childers. Kenny was born September 11, 1933, to Cecil B and Ada (Clifford) Morgan in Dewey, Oklahoma. He received his education at Childers School. He married Emma Jean Breshears on June 20, 1952. They made their home in Childers, OK. While they lived in Childers, they had two daughters, Linda and Peggy Morgan. In 1962, they moved to the family farm in Wann, OK, where they resided for the next 47 years. Kenny was employed by Phillips Petroleum for 30 years. After a short stint of retirement, he worked for Superior Manufacturing in Dewey, OK. After retirement he enjoyed tinkering in the garage and helping his friends. In December 2009, they moved to their current residence in Bartlesville, OK. He was a master mechanic; he fixed every lawn mower and weed eater in the neighborhood. Kenny enjoyed fishing, working on the farm, and fixing anything that had wheels. During their retirement years Ken and Emma played cards every morning, most days Emma swore he cheated. Kenny was preceded in death by the one and only love of his life of 67 years, Emma. His parents, Cecil B and Ada, three brothers – Dick, Jack and Clifford, three sister – Betty, Lila, Cecilia, one infant granddaughter, and an infant great grandson. He is survived by two daughters Linda Camden and Peggy Gillman of Bartlesville, Grandchildren John Ray Gillman and his wife Kristen of Stillwater, Christopher Gillman and his wife Charity of Broken Arrow, Melissa Werts and her husband Donny of Bartlesville, and two great grandsons DJ Werts and Michael Ryan Gillman, one sister Wanda Jo Brazeal of Bartlesville, one brother- in-law, Donald Breshears, of San Antonio, Texas and numerous nieces, nephews and cousins. In the spirit of Kenny’s kindness and his willingness to help others in need, the family requests those who wish to honor his memory continue his charitable acts by loving the people in your everyday lives.

Obituary for Kenneth Ray Morgan Kenneth Ray Morgan, 87, formerly of Wann, OK passed away on January 22, 2021, after a short illness. There are no services planned at this time due to the pandemic. The family will have a private service at a... View Obituary & Service Information

The family of Kenneth Ray Morgan created this Life Tributes page to make it easy to share your memories.

Send flowers to the Morgan family.