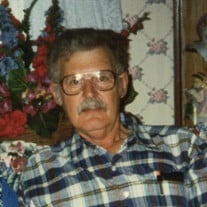 Keith Leon Peaster passed from this earth on Sunday, February 27, 2022. Keith had a long and rewarding life full of wonderful, colorful events. Everyone who knew him said, “They don’t make them like that anymore.” Born in Claremore, Oklahoma and raised in a large family, he learned the value of hard work at an early age and continued this trait throughout his life. His multitude of occupations throughout his life included farming, lumberjacking, heavy equipment operator, blasting expert and finally, factory supervisor for International Paper Company. He proudly served in the U.S. Army and served on the Military Police in Panama. He was a very proud veteran with a love for this great country that never ceased. Upon discharge from the Army, he returned to Alva, Oklahoma and attended college at Northwestern State University. It was there that he met the love of his life, Lois Marie Molz. They were united in marriage after college and moved to “The Land of Opportunity,” California. They had three children, Marsha Lynette, Michael Leon, and Karen Yvonne. Keith loved the cross-country vacations with his family, as well as frequent fishing and camping trips in the family motor home and boat. Keith lost his wife Lois to cancer, but his love for her never lessened. We know she was there to greet him with open arms and her beautiful smile. Keith was preceded in death by his wife Lois, daughter Karen, parents Otto & Anna, and several brothers and sisters. He is survived by daughter Marsha Blotzer, her husband Dale and their children, Chad Blotzer, wife Andi and their children, and Bret Blotzer, wife Kerry and their daughter; his son Dr. Michael Peaster, wife Candi and their children, Daniel Peaster and son, Dr. Jon Peaster, wife Karla and their children, Noah Peaster and fiancé Haley Bertie, and Victoria Peaster and fiancé Dillon Hallagin and their children. He was also survived by several brothers, sisters, and cousins, who were also some of his best friends. Keith left a beautiful and positive influence on this earth which will never be forgotten. A graveside service will be held for Keith on Friday, March 4th at 2:00 p.m. at: Memorial Park Cemetery 4200 Nowata Road Bartlesville, OK 74006

Keith Leon Peaster passed from this earth on Sunday, February 27, 2022. Keith had a long and rewarding life full of wonderful, colorful events. Everyone who knew him said, &#8220;They don&#8217;t make them like that anymore.&#8221; Born in... View Obituary & Service Information

The family of Keith Leon Peaster created this Life Tributes page to make it easy to share your memories.

Keith Leon Peaster passed from this earth on Sunday, February...

Send flowers to the Peaster family.