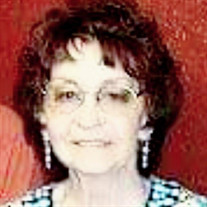 Kathryn Marie McGaugh transitioned into the eternal realm, beginning her journey toward The Light of The Glory of God on December 9, 2021, in Bartlesville, Oklahoma. Kathryn was born on July 20, 1945, to Henry Clay and Estella Josephine (Root) McGaugh in Benedict, Kansas. As a young girl, her family moved to Mound Valley, Oklahoma, where she attended school. Kathryn married Douglas Lynn Swanson, Sr. and to this union, four children were born: Linda Fox, Douglas Lynn Swanson Jr., Teressa Swanson, and Joel Bart Swanson. Kathryn was predeceased by her parents, one sister, Ohdean Meadows, four brothers, Clifton McGaugh, Henry Clay McGaugh Jr., Billy McGaugh, Truman McGaugh, and her son-in-law, John Fox. She is survived by her four children, and Daughter-In-Law, Sharon Fouts-Swanson, five grandchildren, six great-grandchildren, one brother, Don McGaugh, and numerous nieces and nephews. Kathryn loved The Lord with her whole heart and attended Mass with her dearest friend, Patty Pavlich, and her family when possible. A Funeral Liturgy with her intentions will be held Thursday, January 20 at 2 pm ( Rosary at 1pm) at St. John Before The Latin Gate Roman Catholic Church, in Bartlesville. Interment will be on a future date in Fredonia, Kansas. Cremation rites have been accorded to Stumpff's Funeral Home. The family extends a special thanks to Father John O'Niell, Father M. Price Oswalt, The Rosary Prayer Group, for their spiritual assistance, and those who attended to her needs in life, and following her passing. Memorial Gifts may be made in Kathryn's honor to The Lighthouse Outreach, Saint John at The Latin Gate, Catholic Church, or Catholic Charities in Bartlesville

Kathryn Marie McGaugh transitioned into the eternal realm, beginning her journey toward The Light of The Glory of God on December 9, 2021, in Bartlesville, Oklahoma. Kathryn was born on July 20, 1945, to Henry Clay and Estella Josephine (Root)... View Obituary & Service Information

The family of Kathryn Marie McGaugh created this Life Tributes page to make it easy to share your memories.

Send flowers to the McGaugh family.