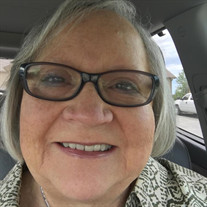 Karen Sue Sisco, 72, of Bartlesville, Oklahoma passed away on Monday, September 20, 2021, after a lengthy battle with heart issues. She was born in Bartlesville, Oklahoma on August 29, 1949 to Kenneth & Charline Gibson. Karen was a member of the Dewey High School Class of 1967. After High School, Karen went to work at Phillips Petroleum Company, serving both in the mailroom and the research and development library. It was at this time that she met and started Dating Terry Sisco. On March 22, 1969, Karen married, Terry, and they’ve made Bartlesville their home ever since. After her time at Phillips, Karen transitioned to the 66 Federal Credit Union where she eventually was named head teller. In 1978, Karen transitioned into her new, and most treasured role, as a mom. Karen stayed at home for many years raising their two boys. She eventually stepped back into the work force serving as an aide at Central Middle School. It was at this time that she received the nick name “Maw” from her nephew’s friends, because of the way she made them all feel like part of the family. After Central, Karen moved to Kane Elementary where she served as a reading specialist and met some of her dearest, life-long friends, who would later be called the “Zin Sisters.” Karen also worked at Wayside School, Oklahoma Wesleyan University, and Quality Vision, where she served faithfully and continued to bless others through her strong work ethic and love for people. Karen was a woman of many talents. She loved to sing, and for many years, while a member at First Wesleyan Church, she sang in the choir, even performing as a soloist for special music on Sunday mornings. She loved to bake and was a true artist when it came to her cake decorating skills. Karen also enjoyed crafting and ceramics, which gave her another outlet to utilize her gifts. Karen had a personal relationship with Jesus, having trusted in him as her Lord and Savior. Outside of her faith, Karen’s greatest delight was her family. She loved to make memories with them and celebrate their talents and accomplishments. You could always find her at school events and sports fields cheering on and encouraging her kids, family, and friends. There wasn’t a better storyteller and story creator than Karen Sisco. She made a lasting impact on people’s lives, serving as friend, neighbor, chef, coach, baker, teacher, and motherly figure. She will be missed by her family and friends, who she cared for and loved deeply. Karen is survived by her husband, Terry Sisco, Bartlesville, OK; son, Kent Sisco and wife Hannah, Canadian, TX; son, Lance Sisco and wife Mandy, Richardson, TX; sister, Gail Garland and husband Greg, Houston, TX, sister-in-law, Susan Julian and husband Darrell, Bartlesville, OK, sister-in-law, Lisa Sisco, Tyler, TX; six grandchildren, Mason Drager, Kiptyn Sisco, Allie Sisco, Caleb Sisco, Riley Sisco, and Griffin Sisco, six nieces and nephews, Jason Whitson and wife Siobhan, Jared Coppedge and wife Kim, Stacey Dawson and husband Justin, Tim Garland and wife Genevieve, Jon Garland and wife Serena, Justin Sisco and wife Alicia, eleven great nephews and nieces, Austin Coppedge and wife Lauren, Logan Dawson, Mackenzie Dawson, Kamdyn Dawson, Avery Garland, Noah Garland, Abby Whitson, Jack Whitson, Ronan McDonnell, Bailee Miller, & Addison Sisco. She is also survived by a host of other cherished family, friends, and former students that she considered her own. Karen was preceded in death by her infant twin sister, Kathryn Lou Gibson, parents, Kenneth & Charline Gibson, brother-in-law Wayne Sisco, brother-in-law Johnny Whitson, and nephew Jeff Whitson. A Celebration of life will be held on Monday, September 27, 2021 at 11:00 a.m. at First Wesleyan Church, 1776 Silver Lake Road, Bartlesville, Oklahoma. In lieu of flowers, Karen wanted donations sent to Oklahoma Heart Institute, 1120 S. Utica Ave., Tulsa, OK, 74104. This place and team became very special to her in this past year.

The family of Karen Sue Sisco created this Life Tributes page to make it easy to share your memories.

Karen Sue Sisco, 72, of Bartlesville, Oklahoma passed away on...

Send flowers to the Sisco family.