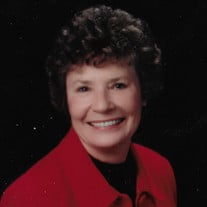 June H. Mendenhall, 86, of Sedan, Kansas, passed away on Wednesday, September 16, 2019 at home with her family at her side. June was born on September 6, 1933 in Hutchinson, Kansas, the daughter of Richard and Nancy Winchester Hereford. She graduated from Emporia High School and attended her freshman year of college at Gulf Park College for Women in Mississippi. She later transferred to Kansas University and was a member of the Pi Beta Phi Sorority, graduating from the School of Education. She married Roscoe L. Mendenhall Jr. on March 26, 1955 at the First Presbyterian Church in Emporia, Kansas. He passed away on March 23, 1979 in Sedan, Kansas. June taught school for seven years and together with her husband Roscoe managed Mendenhall Drilling Properties. June was a member of Sedan Epiphany Episcopal Church and had served as senior and junior warden of the vestry, was a past president of St. Agnes Guild, delegate to the Kansas Diocese convention, a member of Altar Guild and Church Periodical Club. She was Chalicist for Episcopal General Convention, and president of the Episcopal Church Women of Kansas. She served as a vice-president on the Sedan Hospital Board, served on the Sedan Library board, was a member and pat president of P.E.O. Chapter DC, and was vice president of the Sedan Area Foundation. June enjoyed traveling, playing bridge, and spending time with friends. Surviving family members include: a son, Roscoe L. Mendenhall III and wife Sherry of Andover, Kansas, daughter Melissa McGrath and husband Patrick of Allen, Texas, and daughter Karen Nunnelely of Bartlesville, Oklahoma; grandchildren Kelsey and Grant Talbott, Allison and Jennifer Mendenhall of Wichita, Joshua Nunneley of Bartlesville, Katie and Thomas Deetjen of Pittsburg, Pennsylvania, Patrick McGrath of Austin, Texas, and Matthew McGrath of Seattle, Washington; great-granddaughters, Georgia and Beatrice Deetjen; sisters Joan Underwood and husband John of Bozeman, Montana and Judy Kissell and husband Peter of Coronado, California. She is preceded in death by her parents, husband, son Mark Mendenhall, and grandson John Nunneley. A memorial service will be held at 10:00 a.m. Friday, October 11 at Epiphany Episcopal Church, 309 West Elm, Sedan, Kansas. In lieu of flowers, a memorial contribution can be made to Sedan Public Library, 115 N. Chautauqua Street, Sedan, Kansas 67361.

June H. Mendenhall, 86, of Sedan, Kansas, passed away on Wednesday, September 16, 2019 at home with her family at her side. June was born on September 6, 1933 in Hutchinson, Kansas, the daughter of Richard and Nancy Winchester Hereford. She... View Obituary & Service Information

The family of June H. Mendenhall created this Life Tributes page to make it easy to share your memories.

June H. Mendenhall, 86, of Sedan, Kansas, passed away on Wednesday,...

Send flowers to the Mendenhall family.